Oh.... hello! Been a while, huh? I know, I have definitely been neglecting this little blog over the past few months. I'm not going to use the excuse of too little time, because clearly I used to find time for blogging even when I was super busy. I also can't blame a lack of cooking, because I've been cooking plenty. I guess my simplest explanation is this:

And that's okay. In fact, that's more than okay... it's life! I'm rolling with the changes that accompany personal growth. I'm making conscious, purposeful choices to live the life I want to live, and sometimes blogging just doesn't fit in with those choices. Sometimes it does. Like today. But often it doesn't. So basically... I'm setting no rules for myself when it comes to a hobby like blogging. When I feel it, I choose it; when I don't, I choose something else. Simple!

Today though, I feel it. I made a fantastic recipe this week that I can't stand to hold onto all for myself. I woke up with an itch to return to the taylor made corner of the internet and share.

So what is it? Shrimp and grits! One of my favorite dishes. 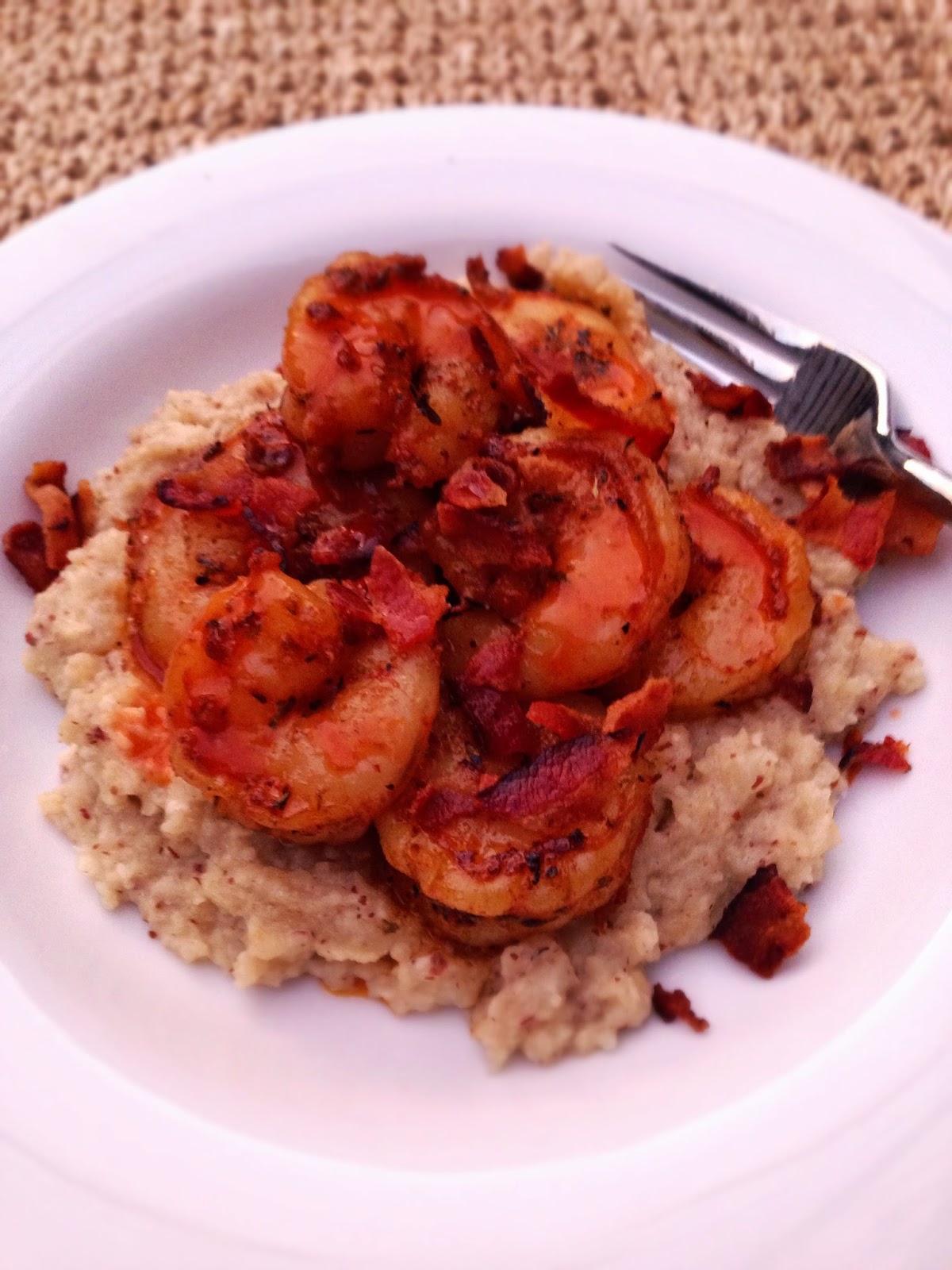 This isn't your typical southern version of shrimp and grits though. The grits aren't actually grits at all.... they're made from cauliflower and ground almonds! Don't put your head in your hands yet though, Southerners. I promise it tastes pretty darn close to the real thing! Yes, we're amping up the veggies and cutting the carbs, but we're not eliminating the flavors and richness that must accompany shrimp and grits. Oh, and bacon. Bacon fat and bacon pieces. Can't be bad! 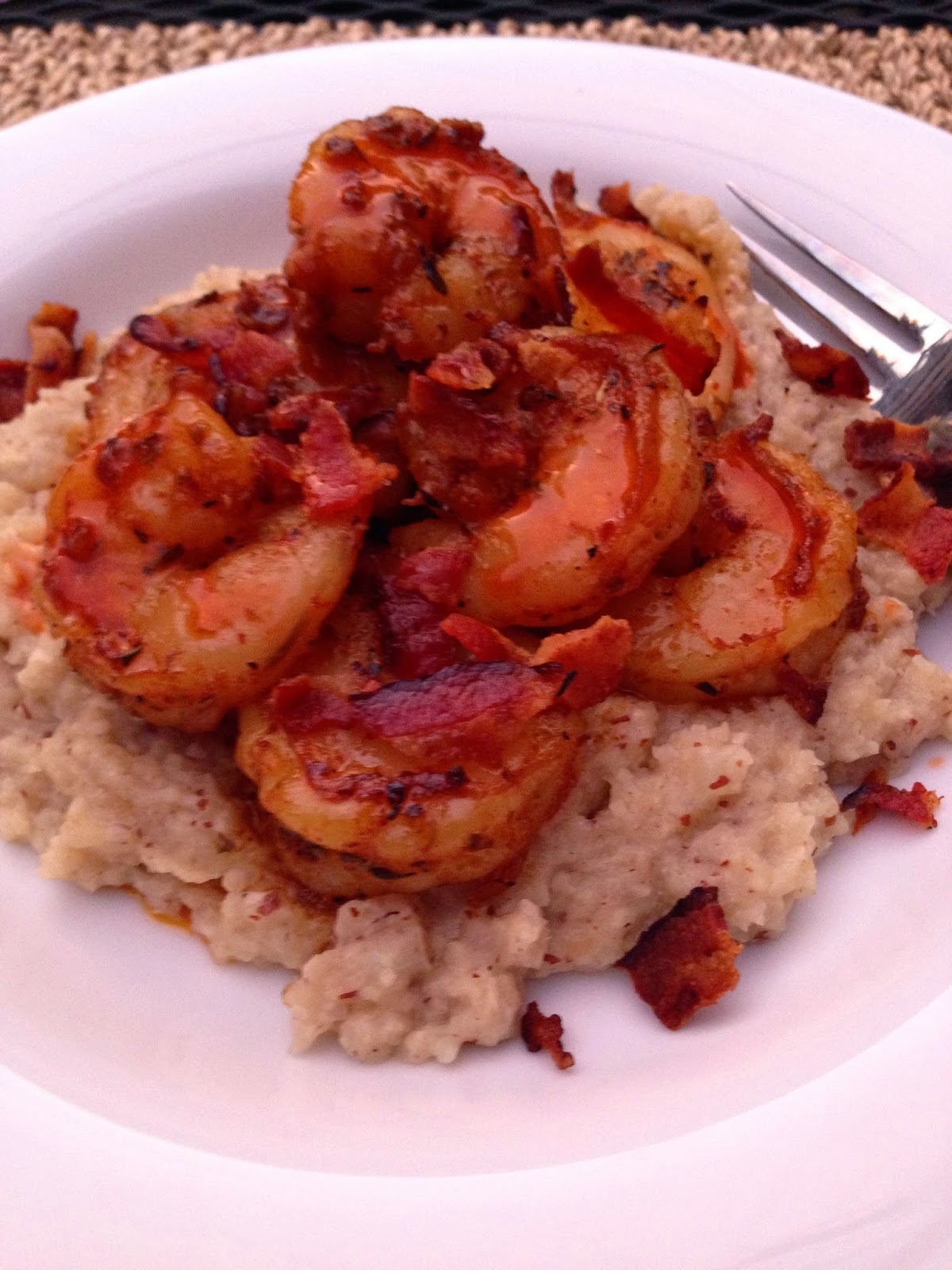 I'm typically skeptical of cauliflower recipes. Mashed potatoes made from cauliflower that taste just like the real thing? I meeaaan. Cauli mash is fine, but come on... it doesn't REALLY taste like mashed potatoes. And cauliflower pizza crust? Sorry, no. That is way too much effort for something that doesn't taste anywhere CLOSE to as good as actual dough crust. I'd much rather just eat a real pizza.

So I wasn't exactly expecting the greatest when I tried to make these grits from cauliflower. But honestly, it works! Grits have very little flavor anyway, so all we really have to do is make the texture of the cauliflower resemble grits then add in the same flavors (i.e., butter and salt). We use almond flour to thicken it up and it works beautifully. Plus, anything topped with plump, spicy sautéed shrimp and bacon is probably gonna be pretty good.

Even though you have to break out your food processor here, the whole dish can be ready in about half an hour. It is really simple. If you love shrimp and grits, you must try. If you're trying to eat paleo or low carb, this is definitely a dish you want to add to your repertoire.

Directions
-Cook 3 slices of bacon in a medium saucepan. Once done, remove the bacon but reserve the pan with 2 tbsp of the bacon grease. Turn heat to low or off.
-Meanwhile, working in batches, pulse a few florets of cauliflower at a time in the food processor until the pieces are the size and shape of rice. Be careful not to over-blend. Work until you have about 3 cups of riced cauliflower.
-In the same saucepan with bacon grease,  turn heat to medium. Sauté the onion for 3-4 minutes. Add the garlic and sauté for about 30 seconds. Add the riced cauliflower. Stir to combine. Add 2 cups of the chicken broth. Stir and combine. Bring to a boil. Add 1 cup of the almond flower and a generous pinch of salt and pepper. Stir to combine and return to a boil. Cover, reduce heat to low, and simmer for about 15 minutes, stirring occasionally.  If the grits are too thin, add more chicken broth. If too thick, add more flour. Add additional salt and pepper to taste. Once the grits are nearly done, stir in 1 tbsp butter.
-Meanwhile, combine all spices for the shrimp. Toss the shrimp in the spice mixture until coated.
-Heat the butter and olive oil in a cast iron skillet over medium heat until hot. Add the shrimp and cook until slightly browned and cooked through (translucent), about 3 minutes. Remove from heat. Squeeze with lemon juice.
-To serve, top a scoop of the "grits" with several cooked shrimp. Crumble the cooked bacon on top. Top with hot sauce if you'd like. 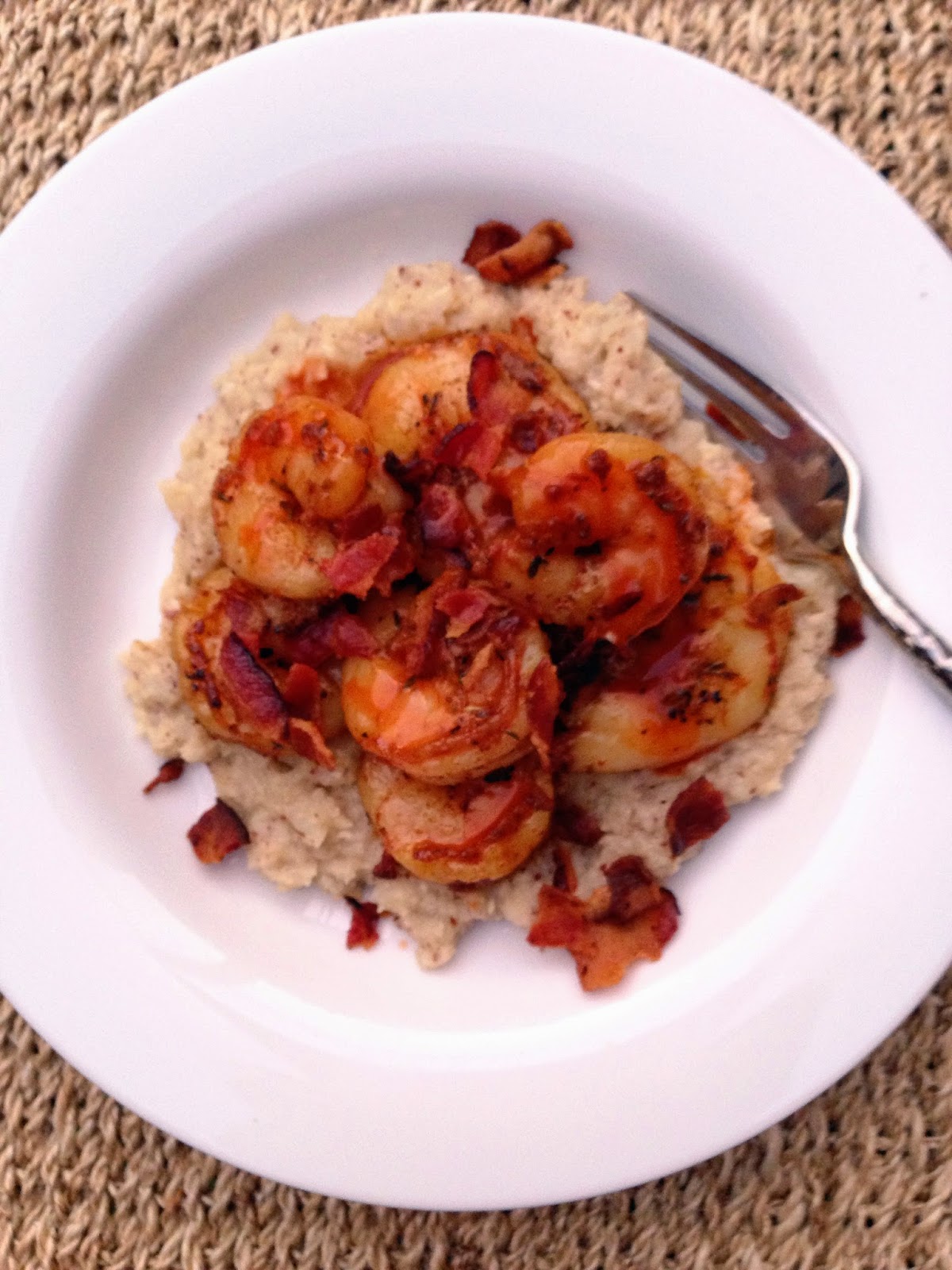