I've never considered myself much of a soup person. You know those people that just LOVE anything soup? Yeah, not one of them. I mean, soup is fine. Some soups are pretty delicious. A warm soup in the winter can be pretty darn comforting. But I rarely choose soup over other more... solid... foods. And cold soup? I've DEFINITELY never been a cold soup gal. I've had gazpacho a couple of times, and I had a cold asparagus soup once (though, admittedly, it was given to me as a complimentary -- i.e., unchosen -- appetizer). These cold soups were pretty good, but also pretty odd. I mean, cold soup is a little weird, right? Something just feels off when you're eating it. Like it should either be hot, or if it's gonna be cold, it should be solid, yeah?

All of this coming from the girl who willingly made a cold soup to share with you today. The truth is, I'm coming around on it! It was a HOT 90 degree day when I decided to go for this chilled golden gazpacho soup. I was flipping through Food and Wine magazine when I spotted the beautiful golden soup with avocado on top. It just called to me. 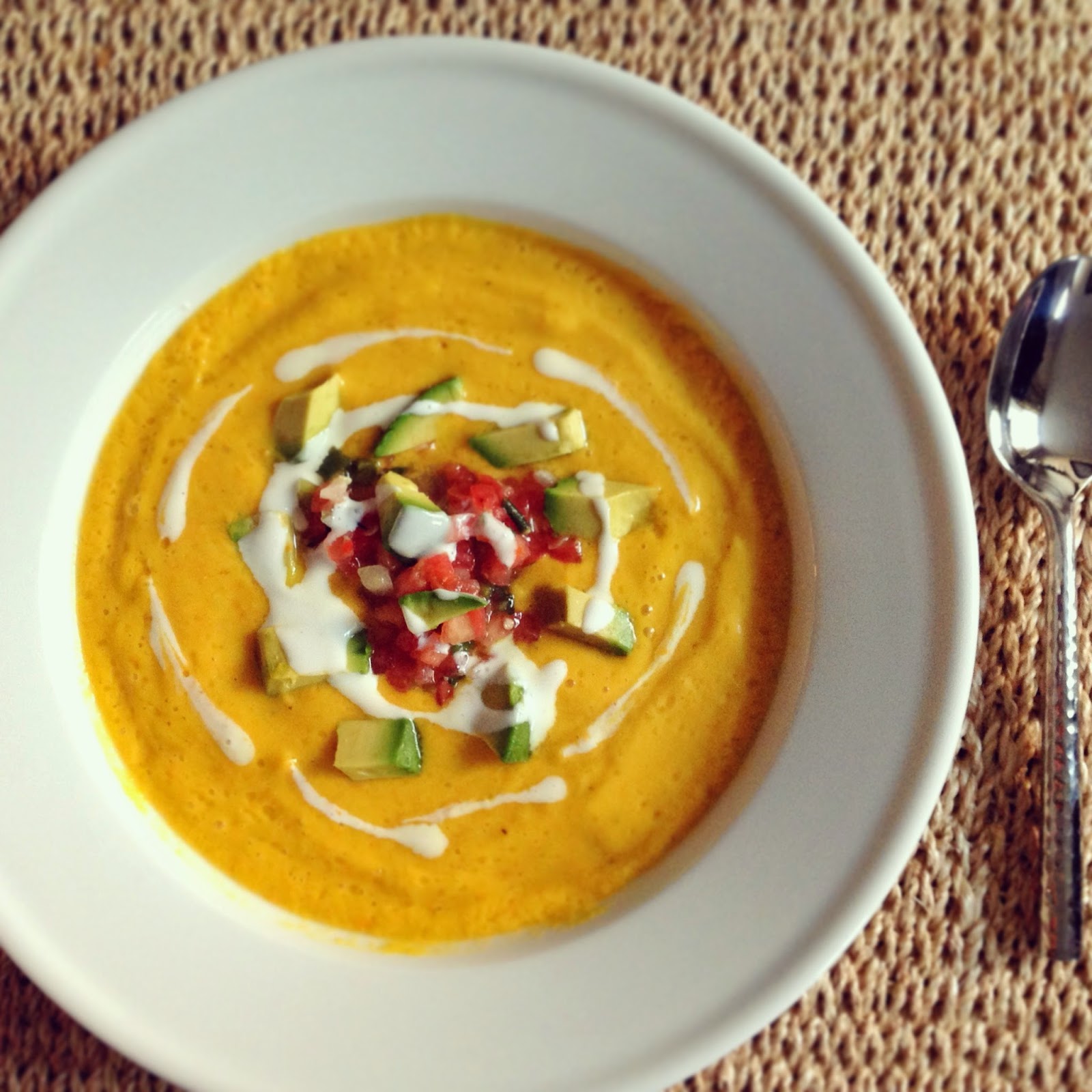 Turns out, I really enjoyed it. I STILL think cold soup is slightly confusing to the mouth, but it's a nice change-up. And this soup is very, very refreshing for a hot summer day. I made a few changes to the original recipe to make it more flavorful (adding some onion; marinating the veggies in oil and vinegar first) and I enjoyed it even more than I thought I would. It's basically made entirely of vegetables and healthy fat. It's a nutritional powerhouse in a bowl! Once you top it with some goodies -- avocado, pico de gallo, greek yogurt/almond milk -- it becomes even more awesome. By the way, this soup is very spicy. Just warning you! You will NEED those cool toppings. You could also remove all of the jalapeño seeds if you don't want as much of a kick, but I loved it that way. 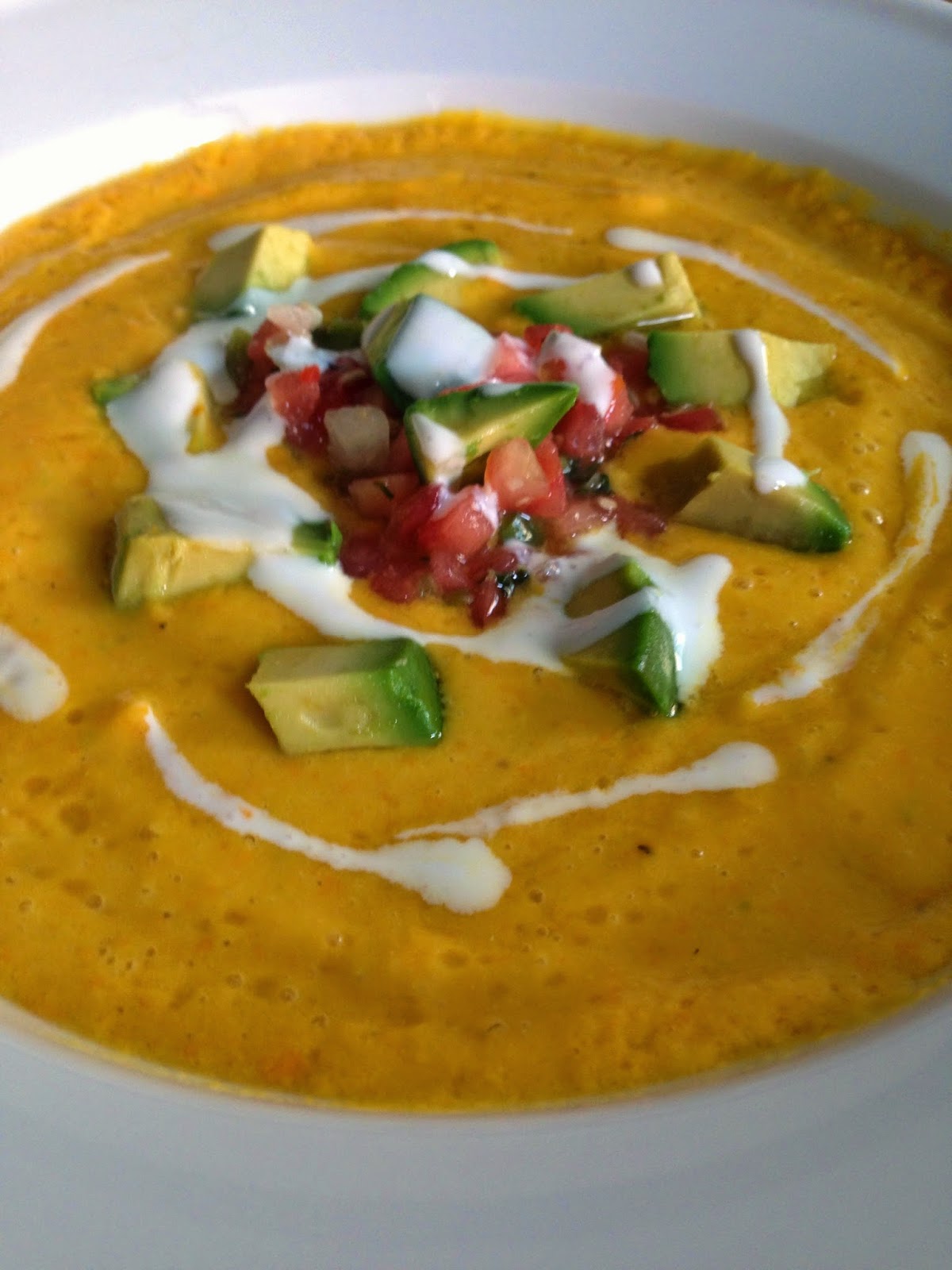 I loved this trifecta of toppings on the gazpacho, but you can really go in your own direction here. Some crunchy tortilla strips or fresh cilantro would be delicious. And your "cream" doesn't HAVE to resemble sperm, I promise (yeah, didn't notice that until later). 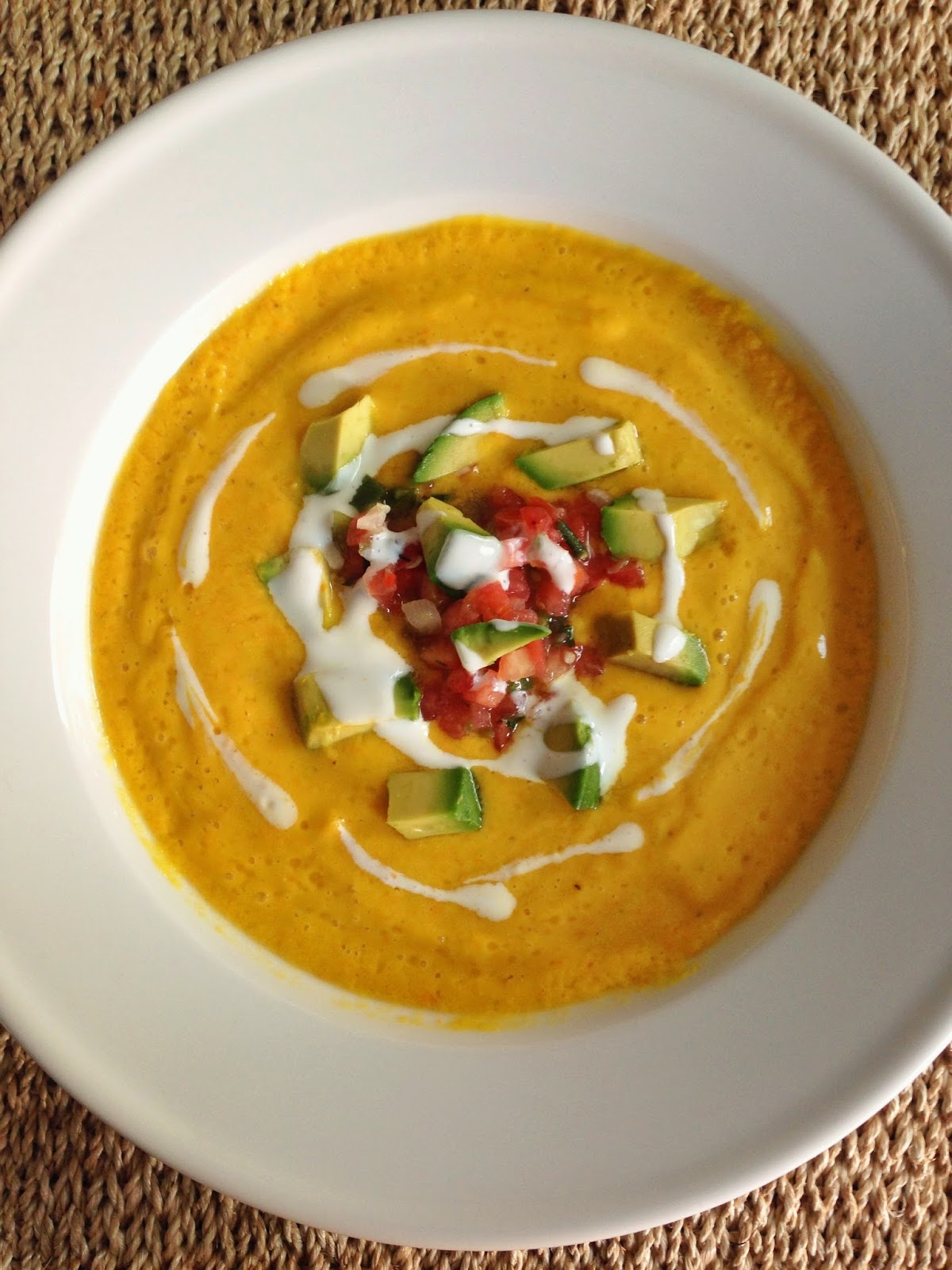 However you enjoy it, you should give this golden gazpacho a try this summer. It makes you look kinda fancy, but it's actually incredibly simple to make. Got a blender? Then you got this. I obviously served mine with something a little more substantial and protein-packed, but this soup could hold its own for a light lunch. [By the way... the chicken pictured here was unreal! Will post the recipe soon]. 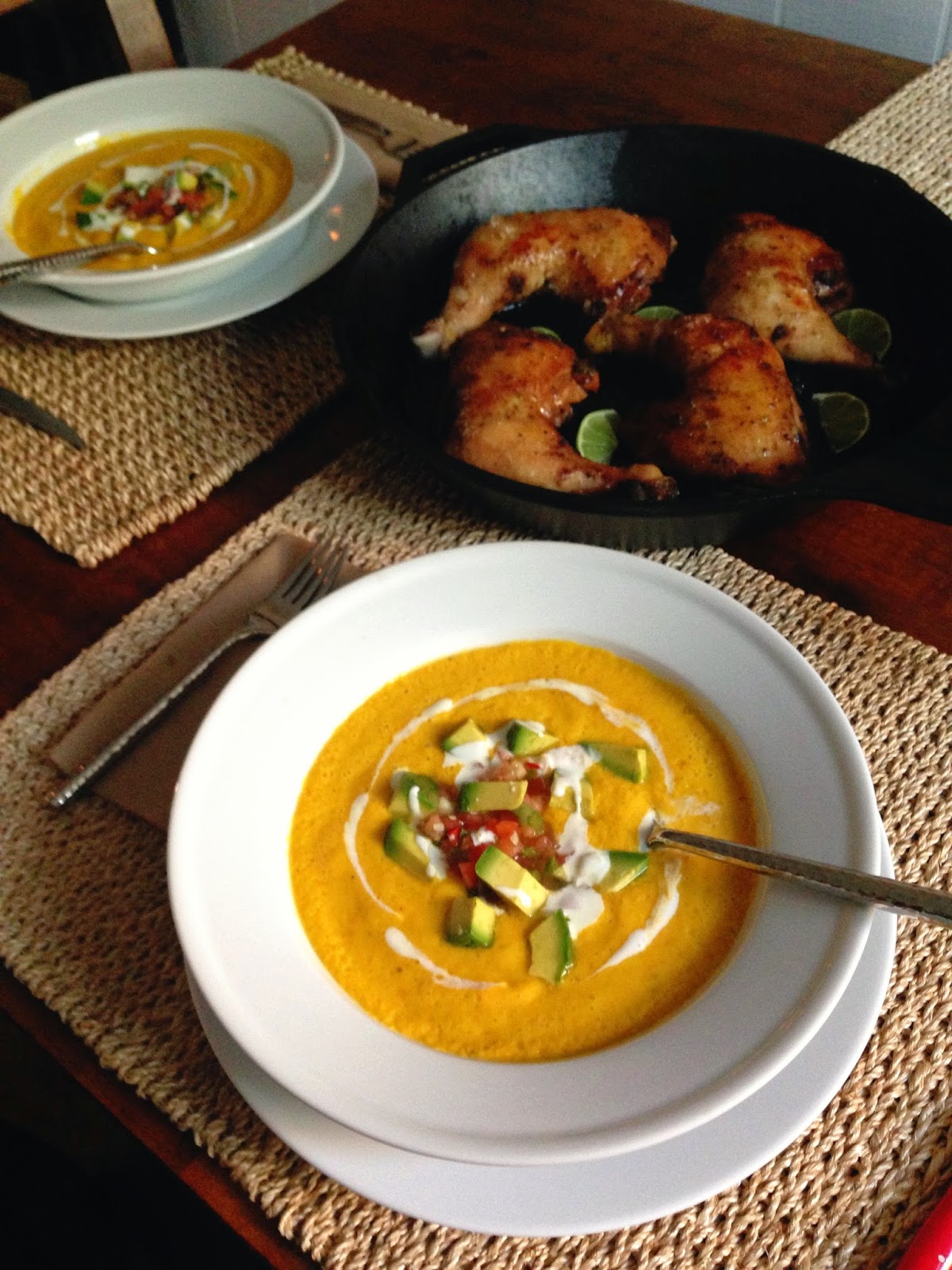 Here's how to make the gazpacho:

This soup requires very little "hands-on" time, but it does have some waiting periods, so be sure to get started at least an hour before you want to eat. First add 2 pounds of yellow or orange (I used orange) cherry tomatoes, 1 sliced jalapeño, one small sliced onion, and one clove of chopped garlic to a bowl. Top with 2 tbsp extra virgin olive oil and 2 tbsp white vinegar. Toss to coat veggies. Cover tightly with saran wrap and place in the fridge to marinate for at least 30 minutes, or several hours if you have it. 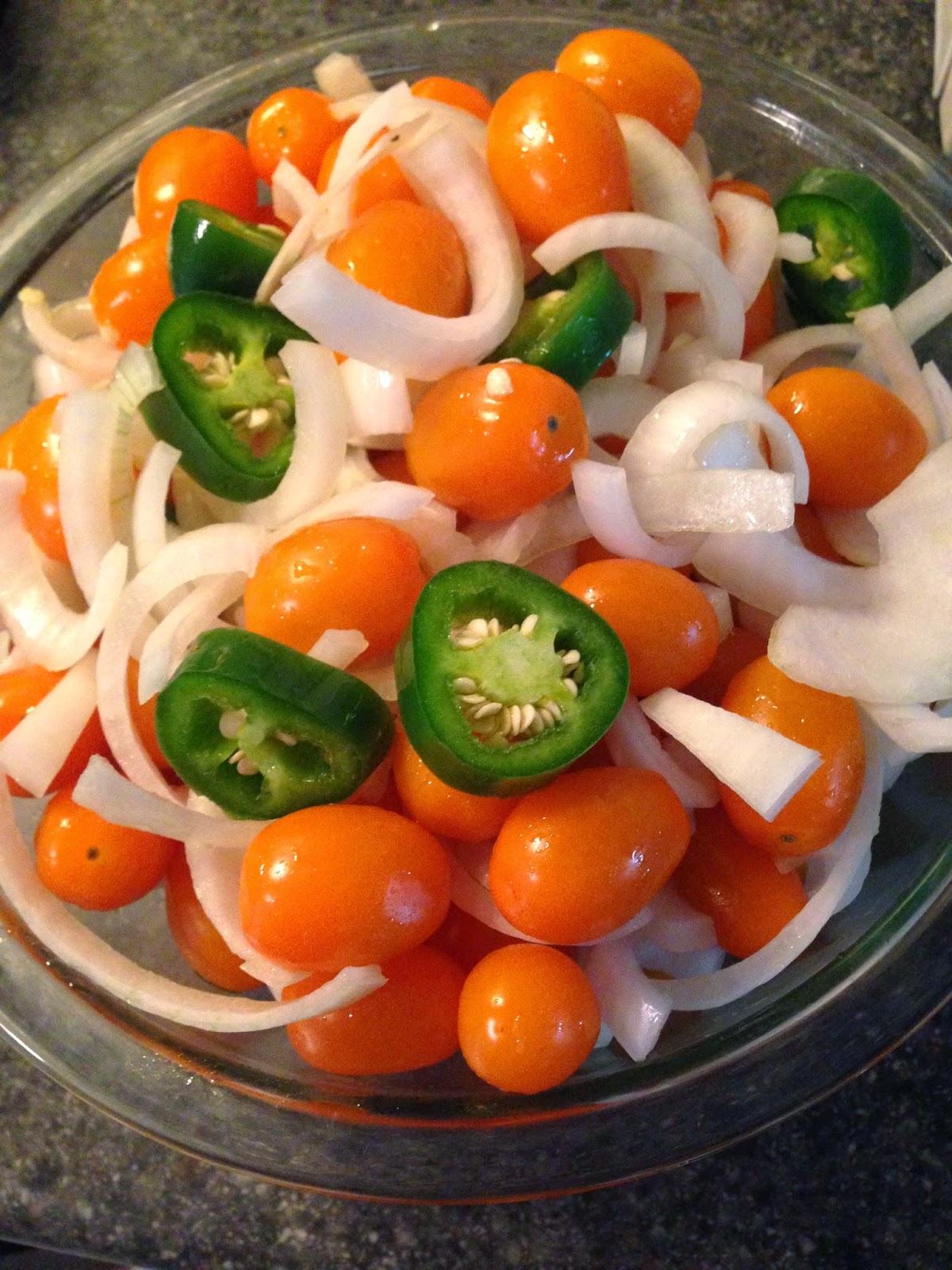 After the veggies have marinated, add them to a blender. Top with 2 more tablespoons of olive oil and 1/4 cup chicken stock (or water). 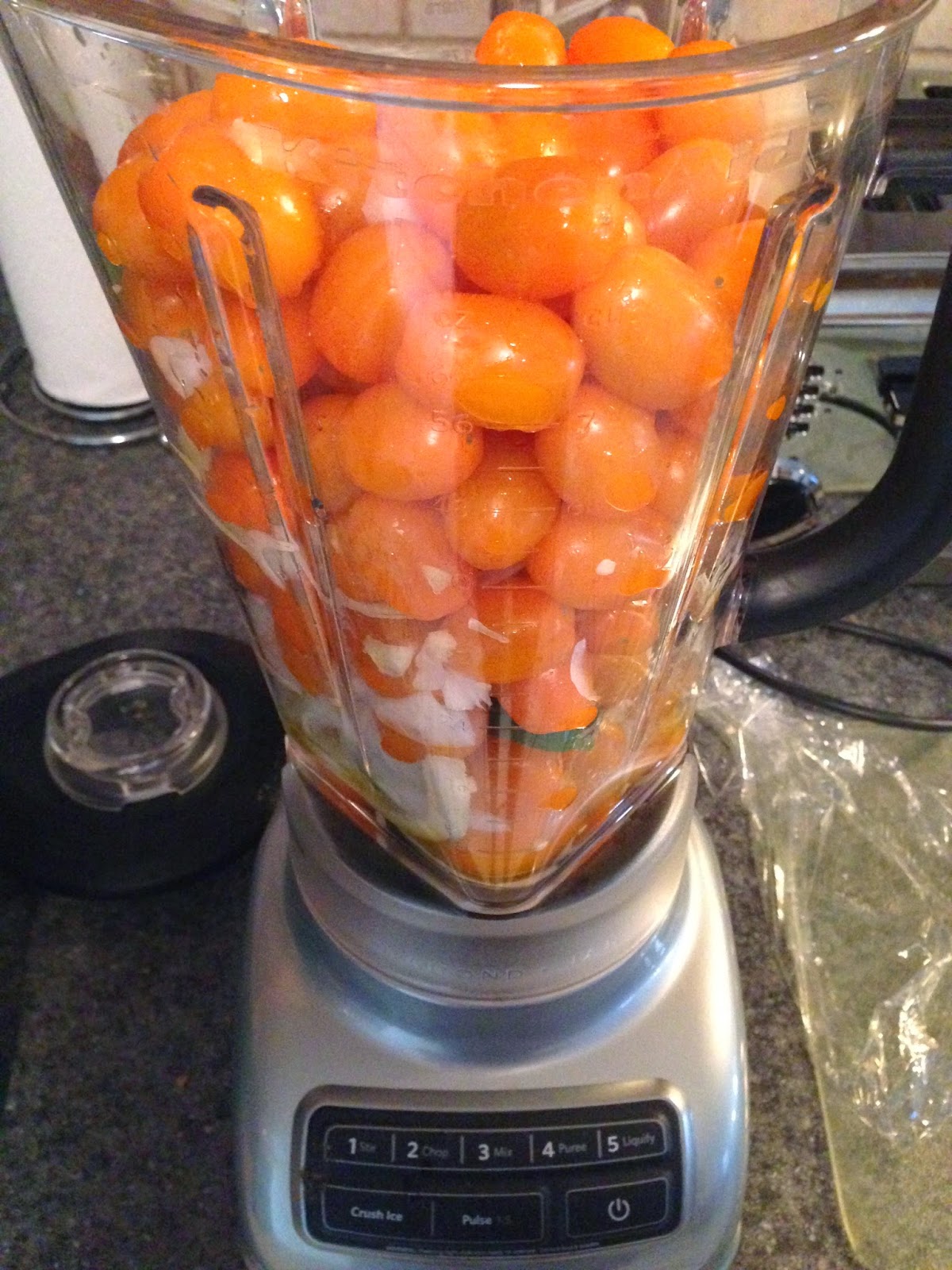 Puree until smooth. Then season to taste with salt and pepper. 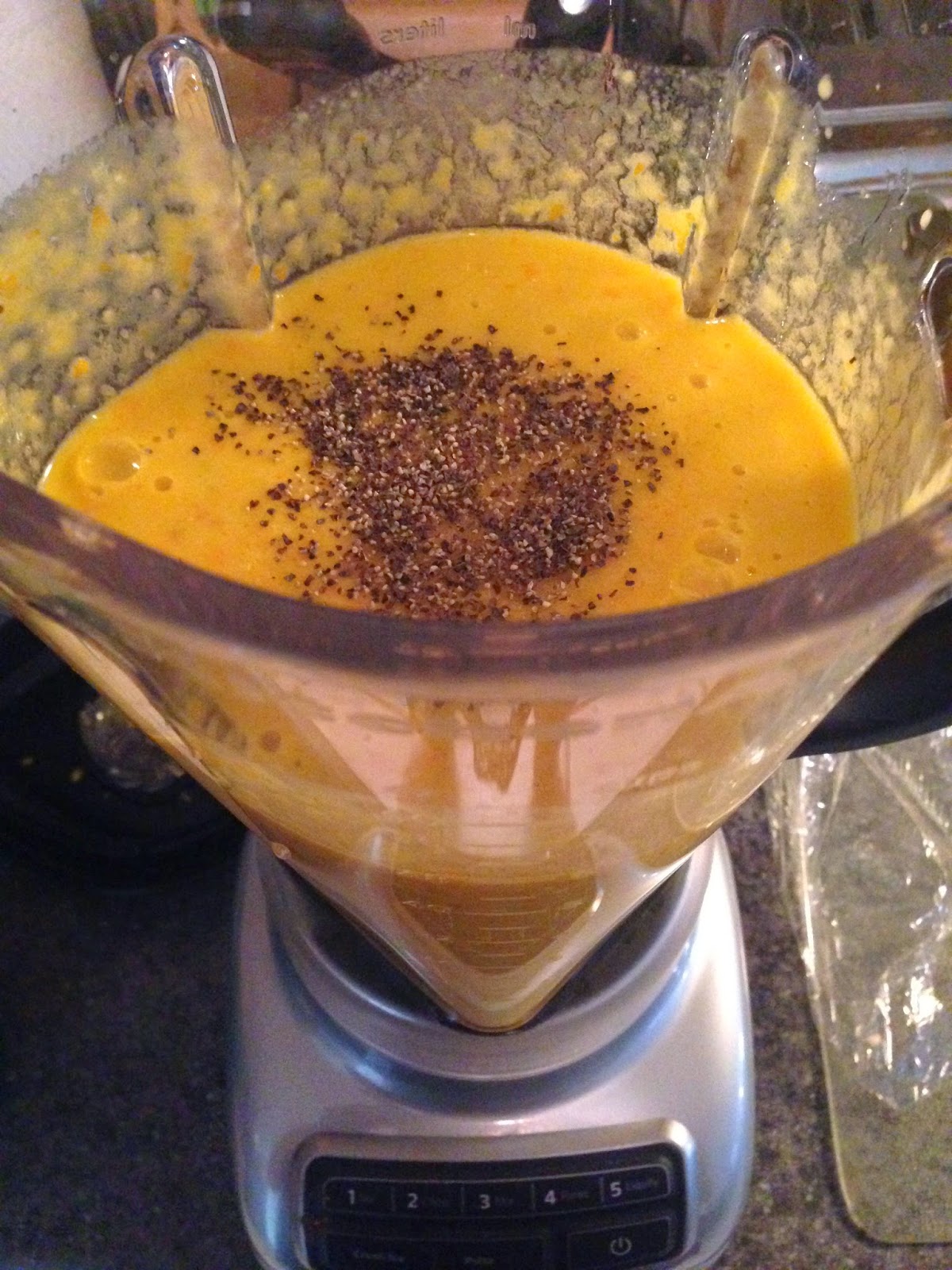 Blend until smooth and incorporated. 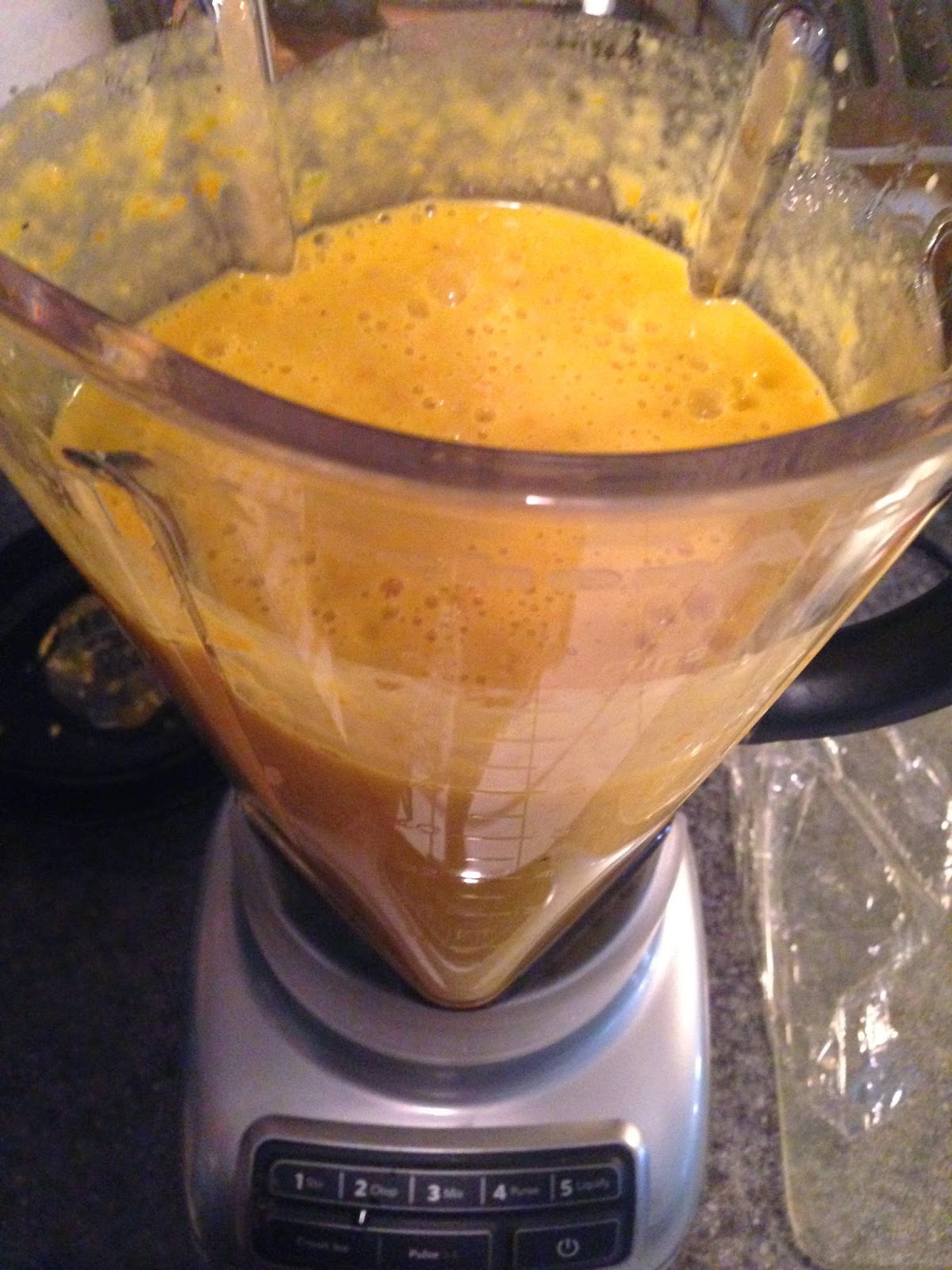 Refrigerate the soup for at least 30 minutes to cool.

Meanwhile, chop an avocado for your topping. To make your "cream" sauce, combine 2 tbsp plain greek yogurt with about 2 tbsp almond milk. Mix. Add more milk if necessary to get a consistency that's thin enough to spoon as a liquid onto the soup. Spicy Golden Gazpacho
For 4 servings
Adapted from Food and Wine

Directions
-At least an hour before eating, combine the tomatoes, onion, garlic, and jalapeño in a large bowl. Top with the vinegar and 2 tbsp of the olive oil. Mix to combine and coat. Cover tightly then let marinate in the fridge for at least 30 minutes (or several hours if possible).
-At least 30 minutes before eating, add the marinating veggies to a blender. Add the remaining 2 tbsp of olive oil and the chicken stock or water. Puree until smooth. Add salt and pepper to taste. Mix to combine. Refrigerate for at least 30 minutes.
-When ready to serve, top with diced avocado, pico de gallo, and a drizzle of the yogurt/milk.
-Leftovers will keep in the fridge for 1-2 days. 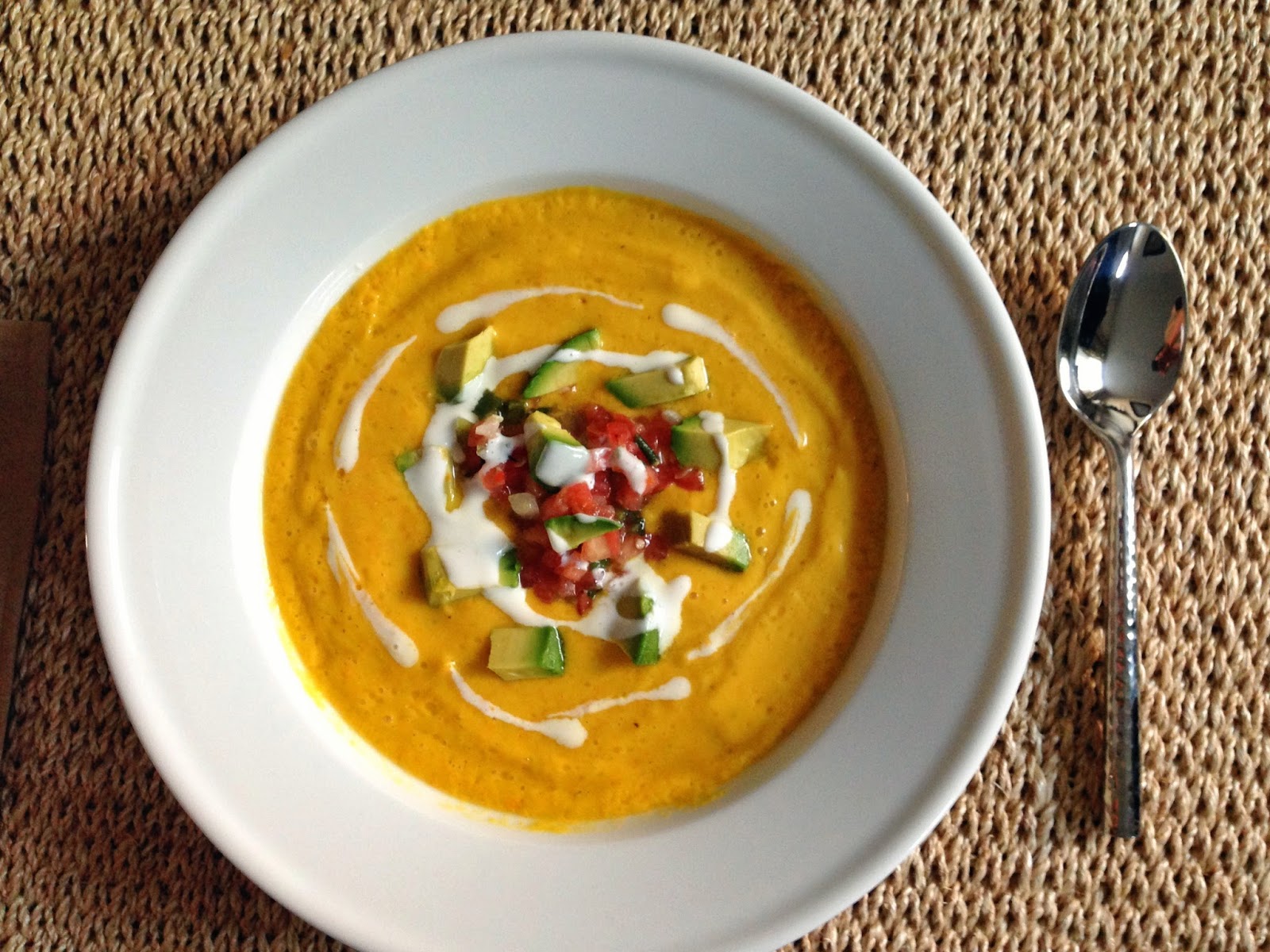