I love potlucks, but I always have a hard time deciding what to bring. I'm not really a dessert baker, so that's not usually in the cards. Making an entree -- such as chicken or barbecue or pasta -- never feels like a good option (too much pressure?). Then in general I worry about making something that's supposed to be served hot -- will there be an oven or microwave available? A socket to plug my crockpot into? Yet at the same time, I don't really want to bring something that has to stay cold in case it's being served outside (fruit salad baking in the sun, anyone?) or the food is perishable. Never know how long potluck food will be sitting out. Dishes served at room temperature seem to be the best option, but who wants to bring another bowl of pasta salad or chips and guacamole?

Okay, am I the only one that puts this much thought into my potluck dish?

The good news is: I have found the perfect thing to bring. Crunchy thai quinoa salad. 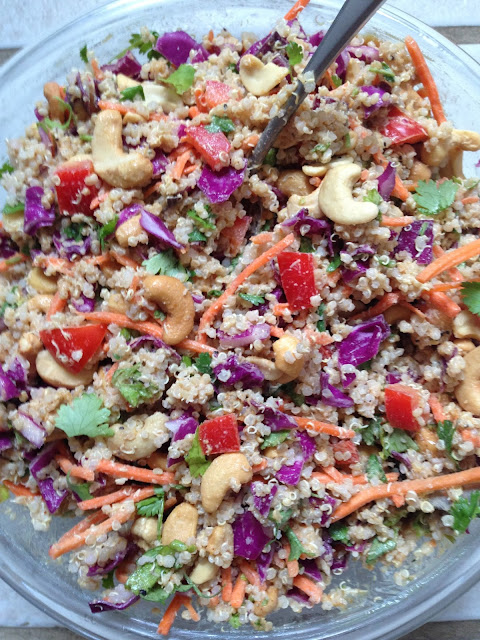 Please allow me to sing this dish's praises and explain why it's the perfect potluck dish. One: it's great served room temperature (but is also yummy leftover either straight out of the fridge or heated up). Two: it's vegetarian and easily made gluten free and/or vegan, to satisfy all of your guests. Three: it's flavorful and unique without being too polarizing (e.g., not super spicy and no super "weird" ingredients). Four: it's easy and quick -- whip it up in half an hour either right before you leave or hours in advance. Five: it makes a ton, so you can sneak away with the leftovers (if there are any!) and enjoy the rest for yourself. Six: it's healthy and nutritious, which others might appreciate in a sea of cookies and cheese dip. Seven: it's colorful and beautiful... they will be impressed! And Eight: it's amazingly DELICIOUS! 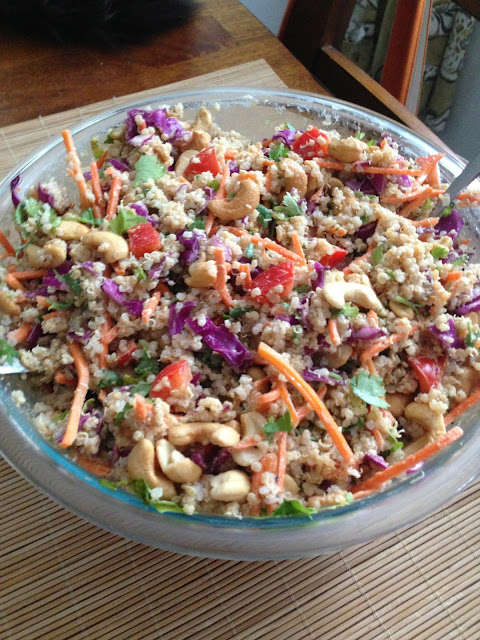 Is that enough reasoning for ya? But, while I'm convinced that this is the BEST POTLUCK DISH EVER.... it's not just for potlucks! Cut the recipe in half and make it for a light lunch or serve it with grilled chicken or shrimp for dinner. You can't go wrong. Even my cat was into it. 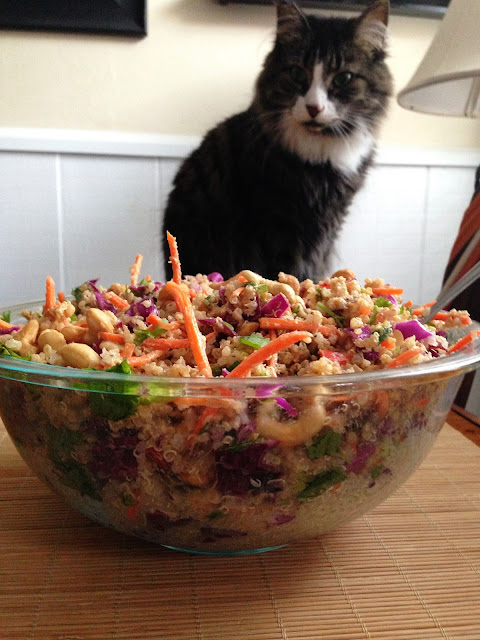 Do yourself a favor and make this stuff. You'll be addicted. 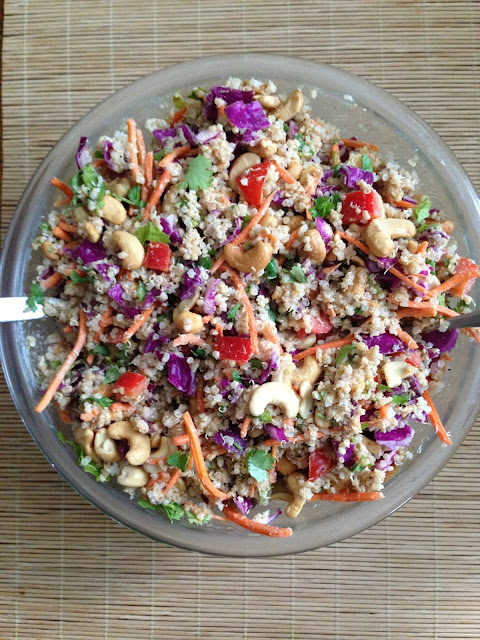 Here's how to make it:

Meanwhile, chop up all of your veggies/herbs: red cabbage, carrots (or buy the pre-shredded carrots), red pepper, red onion, cilantro. 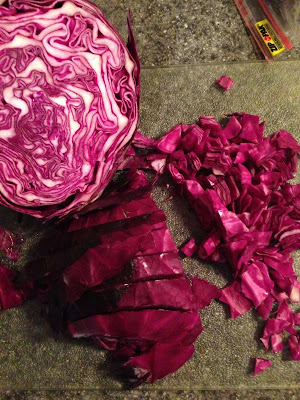 In a large bowl, combine the quinoa and the chopped veggies, along with some cashew halves. Squeeze with the juice of a lime. 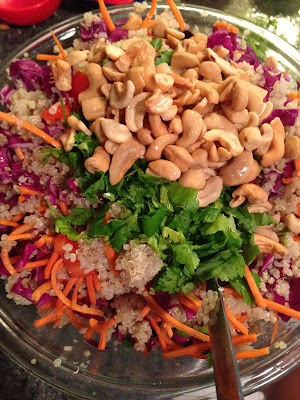 Then, prepare your dressing: combine natural peanut butter, fresh ginger, soy sauce (leave out or replace with tamari for gluten free), honey (agave for vegan), red wine vinegar, and sesame oil. This stuff is delicious. Pour it on. 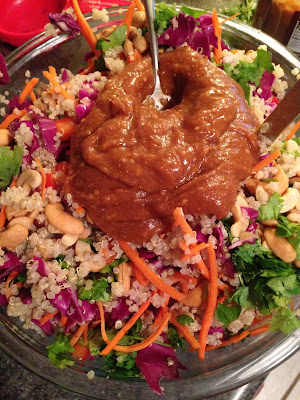 And mix it all together. That's it! Serve immediately or refrigerate until you're ready to go. 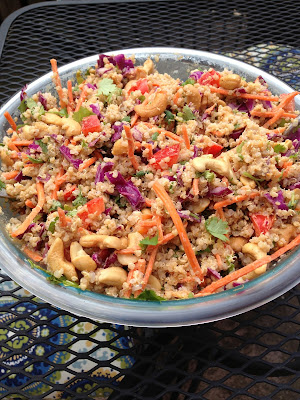 Directions
-Cook quinoa: put quinoa and 3 cups of water in a saucepan. Bring to a boil. Cover, reduce heat to low, and simmer for 15-20 minutes, or until quinoa has absorbed all of the water and is soft and fluffy. Remove from heat and place in a large bowl to cool.
-Make dressing: combine peanut butter, ginger, soy sauce, honey, and sesame oil in a bowl. Whisk until smooth.
-To the quinoa, add the cabbage, bell pepper, onion, carrots, cilantro, green onions, and cilantro. Squeeze with the juice of 1 fresh lime. Pour the dressing on top. Mix everything gently until well combined. Add extra cashews to the top for garnish.