This past Saturday night involved great friends, an Orioles game, ballpark food (think fried), big cheap beers, and country music. Yes, THAT'S how you bring in this wonderful warm weather. On Sunday, though, I needed some rejuvenation (and a cure for my pounding headache). This came in the form of a delicious vegan brunch with some friends, a long sunny walk, finally watching Argo (loved it!), and a make-ahead ham and veggie frittata to start the week off on the right foot. 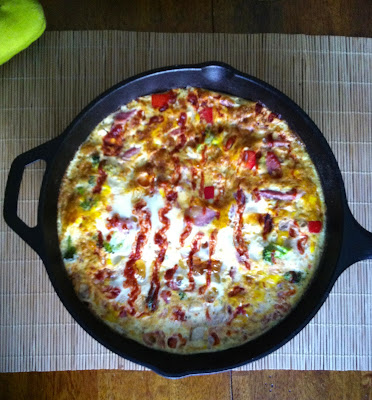 I had never been to an exclusively vegan restaurant before trying Great Sage. If you didn't already pick up on it, I'm kiiind of a meat lover (and let's not even talk about cheese), so vegan isn't exactly my thing. BUT! I can still appreciate vegan food, especially when it's as fresh, healthy, creative, and tasty as it was as Great Sage. I ordered a green juice (made with kale, spinach, apple, carrots, and ginger) and a raw kale and apple salad topped with shaved beet curls. Delish! I've never left a restaurant feeling exponentially healthier than when I arrived. I'd definitely recommend it if you're in the Maryland/DC area. 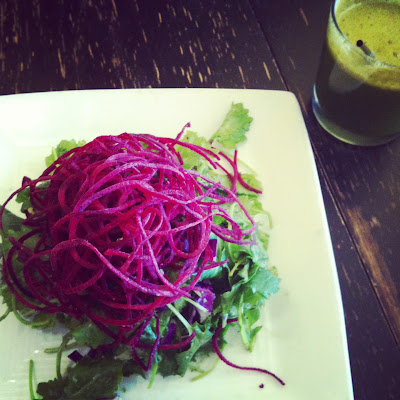 I then decided to make a frittata to have for breakfasts this week, because 1) I wanted to use up some of the leftover Easter ham I have stockpiled in the freezer, and 2) frittatas are easy, healthy, and so yummy. It saves a lot of time in the morning when I already have breakfast made -- just have to grab a slice of the frittata out of the fridge and pop it in the microwave. 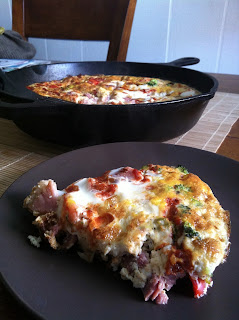 ﻿
So first, I chopped up all of the fresh veggies I had in the fridge into small pieces. I used red pepper, mushrooms, broccoli, and tomato, which was a great combo. You can use whatever sounds good to you though -- I've also made these with squash and zucchini, onion, spinach, etc.
﻿ 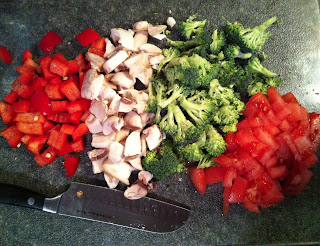 
Heat up a tablespoon of olive oil in an oven-safe skillet. Then, add the veggies. ﻿ 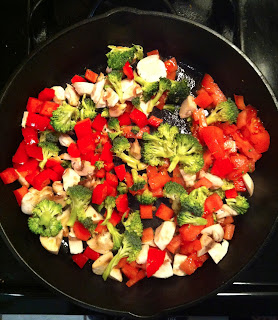 Saute for 3-4 minutes, or until the veggies begin to soften. Then add in about a cup of chopped, cooked ham (chicken would also be great, or leave out the meat altogether) and half a cup of feta cheese. The feta is so, so tasty with the veggies. ﻿ 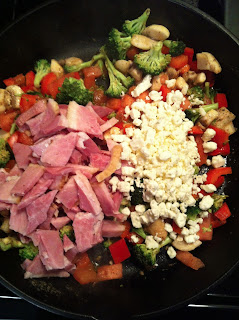 Saute for another minute or two. Season well with salt and pepper. ﻿ 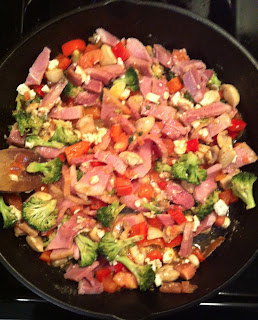 Then, pour in the eggs that you've whisked together: 3 full eggs and 5 egg whites. 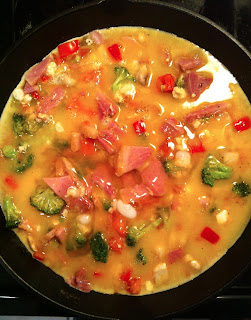 Let cook until the eggs are set on the bottom and beginning to set on top, about 4 minutes or so. Then, top with sriracha -- yep, that's where the magic happens. 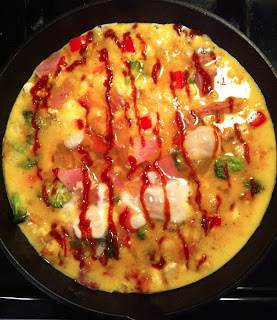 Then pop the whole skillet into a preheated oven on high broil. Cook until set and slightly browned, about 4 more minutes. 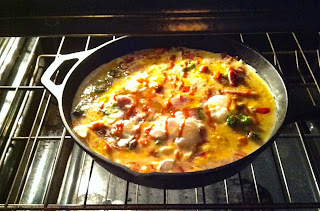 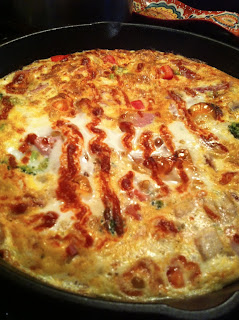 So good! I then let it cool a bit before slicing it into six slices. Since I was saving it for the week, I packaged each slice individually in tin foil. You could also serve immediately. ﻿ 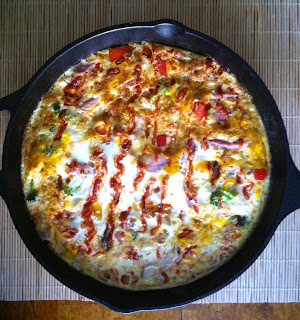 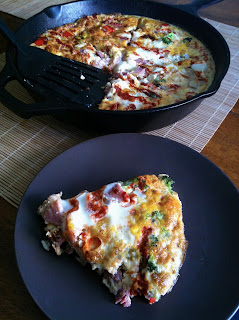 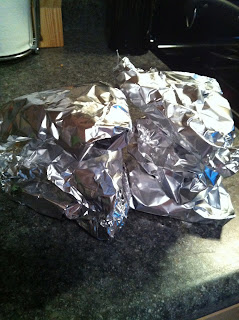 Ham and Veggie Frittata
For 6 servings

Directions
-Preheat oven to broil.
-Heat oil in an oven-safe skillet over medium high heat. Add veggies and saute until slightly softened, 3-4 minutes.
-Meanwhile, whisk together eggs.
-Add ham and feta to skillet and saute for another minute or so. Season with salt and pepper.
-Spread ingrediently evenly around skillet, then pour in the egg mixture. Cook until set on the bottom and slightly set on top, about 3 or 4 minutes. Top with sriracha to taste. Transfer skillet to oven and cook until slightly browned and fully set, about 3 or 4 more minutes. ﻿