I'm still trying to figure out how to find time to put all of it together. It's gonna happen and I'm gonna figure it out. I just....haven't yet. So, now and lately, I'm mostly posting recipes because, 1) I love sharing recipes (duh), and 2) I do somehow make time to cook and simply taking pictures and writing up a post of the recipe is pretty easy. Not too time-consuming.

But I want to share more! So I will. It just might take a little time (like, maybe after I defend my master's thesis in 10.5 days AHH). I appreciate the couple of requests for posts I've gotten and I do plan to follow up on them (hints: organization, healthy snacks, at-home workouts). Just so you know. In the meantime, however, don't be disappointed that this post is another recipe because it's AWESOME. 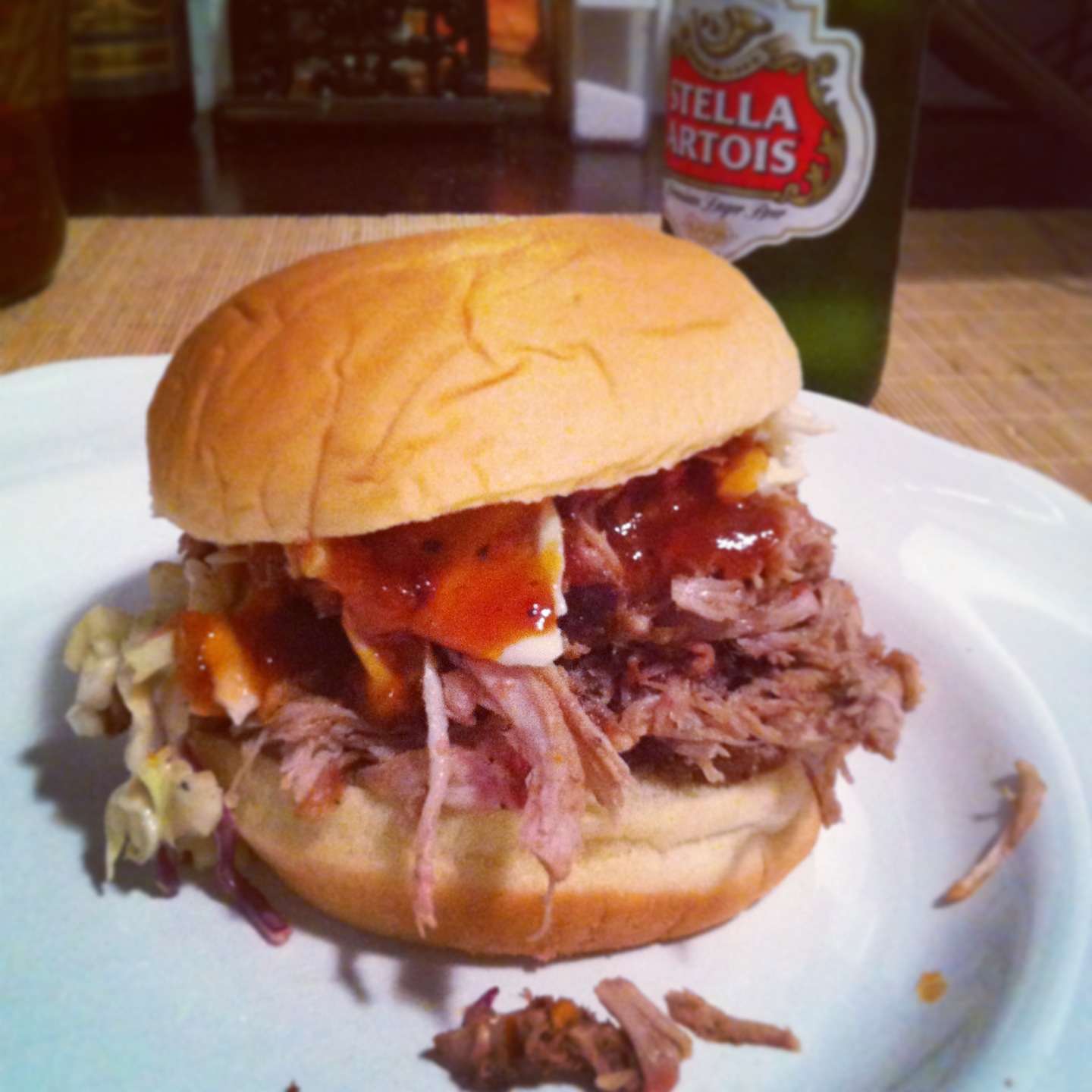 The recipe my mom is most known-for is this barbecue. Our extended family calls it Ruth's Butt (her name is Ruth). When we'd have family gatherings at our house growing up, if we were lucky, my parents would make this barbecue. My mom made the pork and my dad made the sauce. Everyone loves it, and why wouldn't they? The pork butt is slow-cooked with apple cider vinegar in a low-temp oven allllll day until it's fall-apart tender, then topped with a spicy and unique vinegar AND tomato-based barbecue sauce. It's amazing. And somehow I hadn't made it myself until this weekend! My mom emailed me the recipe and I had to try it. The result? *Almost* as good as the original :) 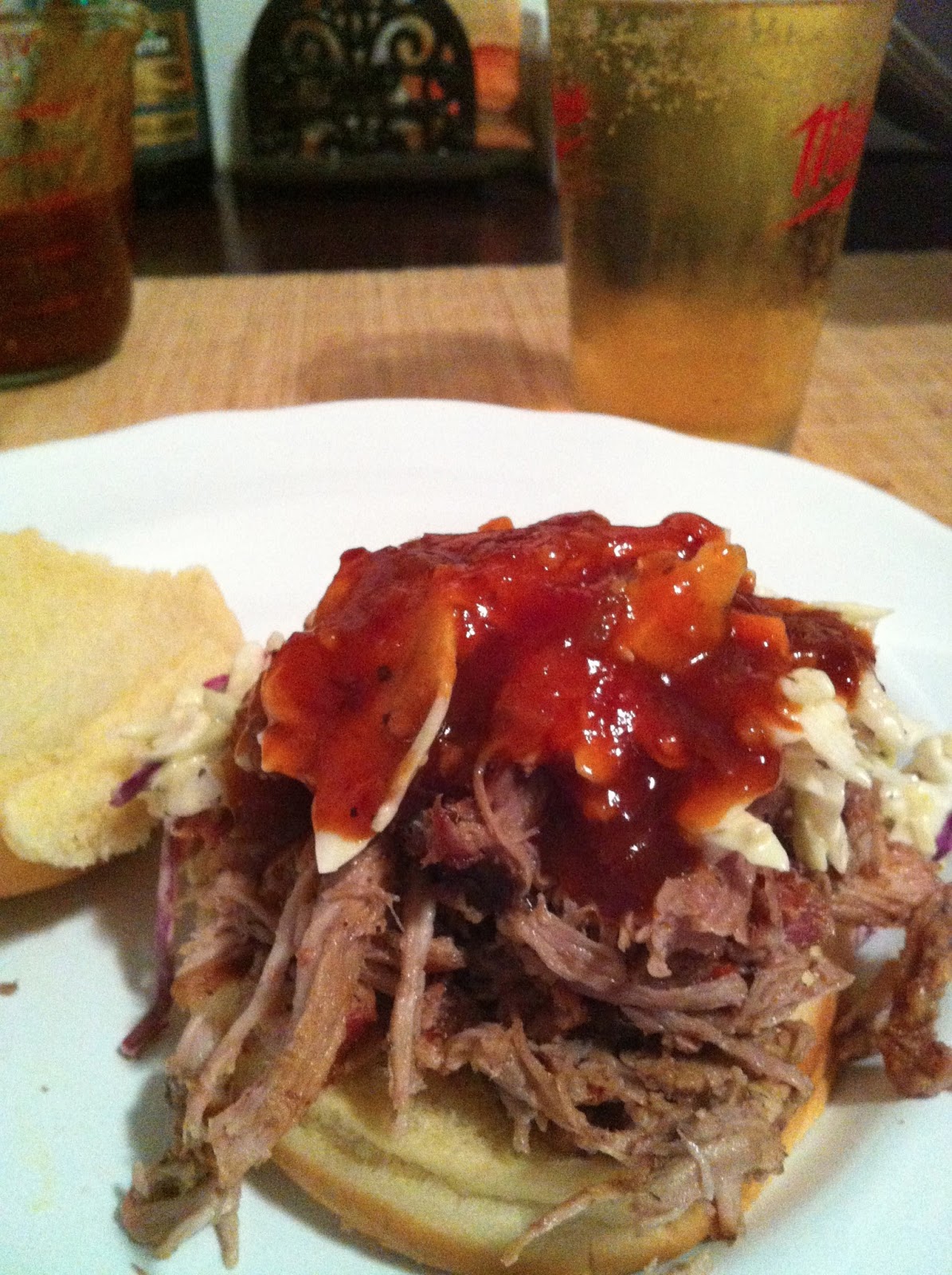 This recipe is an all-day thing. Perfect for a lazy Saturday or Sunday or when you have guests coming over for a casual dinner one weekend night. It won't disappoint!
You need a big 'ol boston butt. You know a pork butt is really the butt of the shoulder, right? Not the actual butt. That would be kind of weird, right? Anyway, a 5-7 pound butt is good. It should have a small piece of bone running through it. 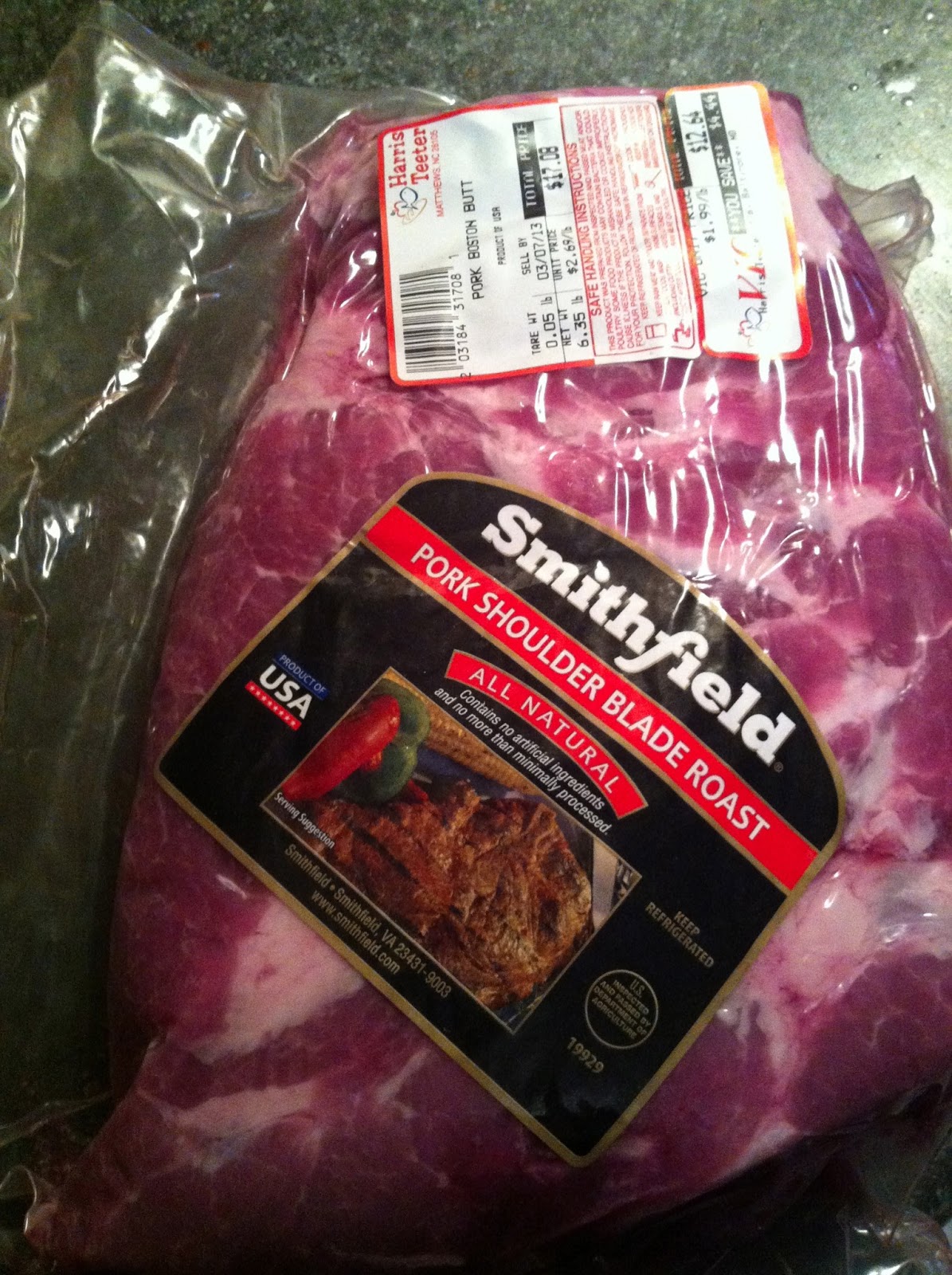 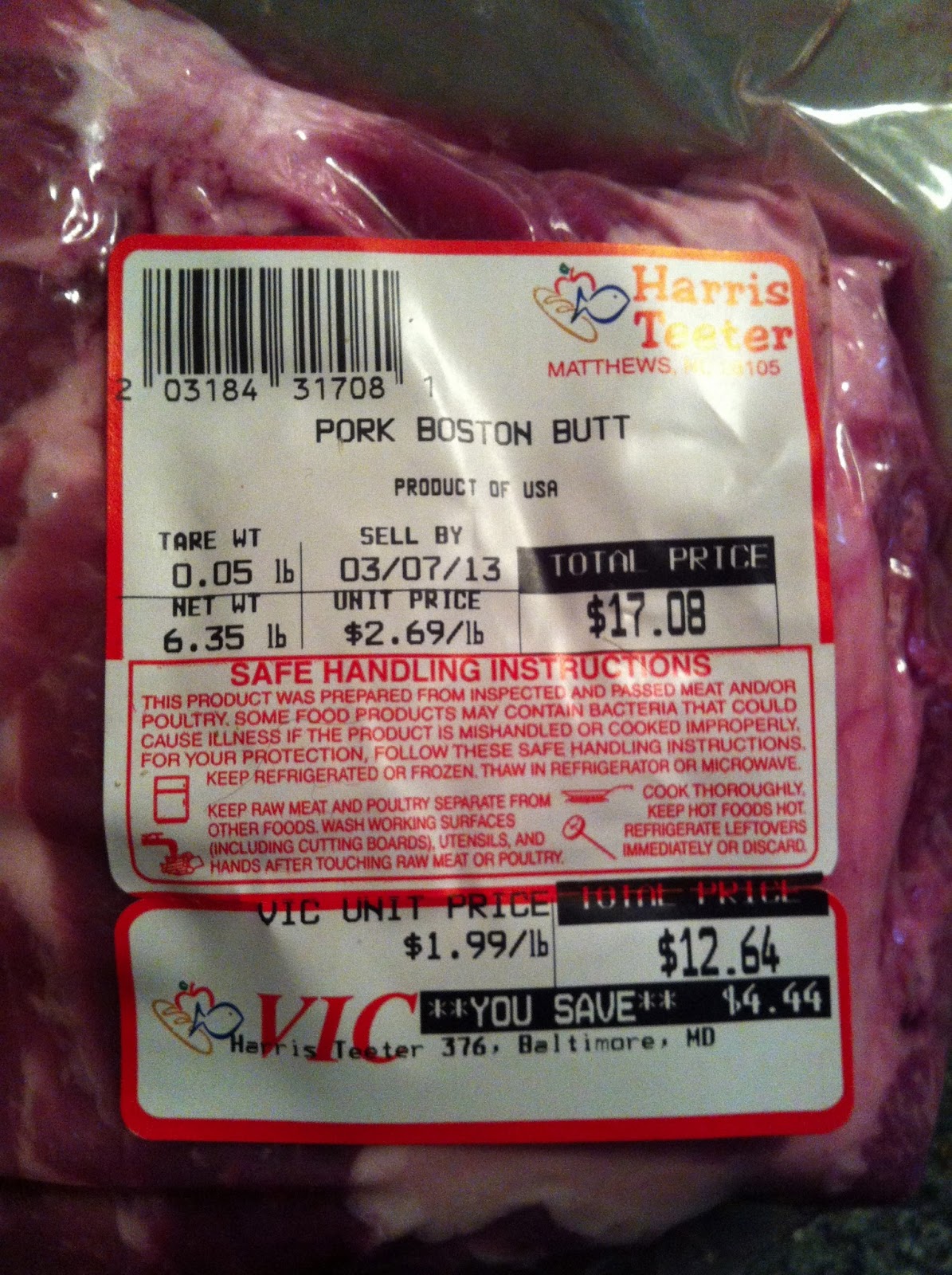 Now, here's where I deviated from the original recipe slightly. My mom says to slice the pork into hunks about 2" thick prior to cooking. However, I didn't do this for 2 reasons: 1) these huge things are really hard to cut when cold and raw and I don't think my sub-par knives were ready for that, and 2) I wanted it to cook it with the bone for a while to get some extra flavor. So, rather than cutting then cooking for 7-8 hours, I cooked it whole for about 5 hours, then cut, then continued to cook for 2-3 hours. Either way should work just fine. Whether it's cut before you put it in or not, you want to put it in a roasting pan (or some contraption that will catch the juices), and cover it with apple cider vinegar, red pepper flakes, and salt and pepper. Maybe about 2-3 cups of apple cider vinegar to start. 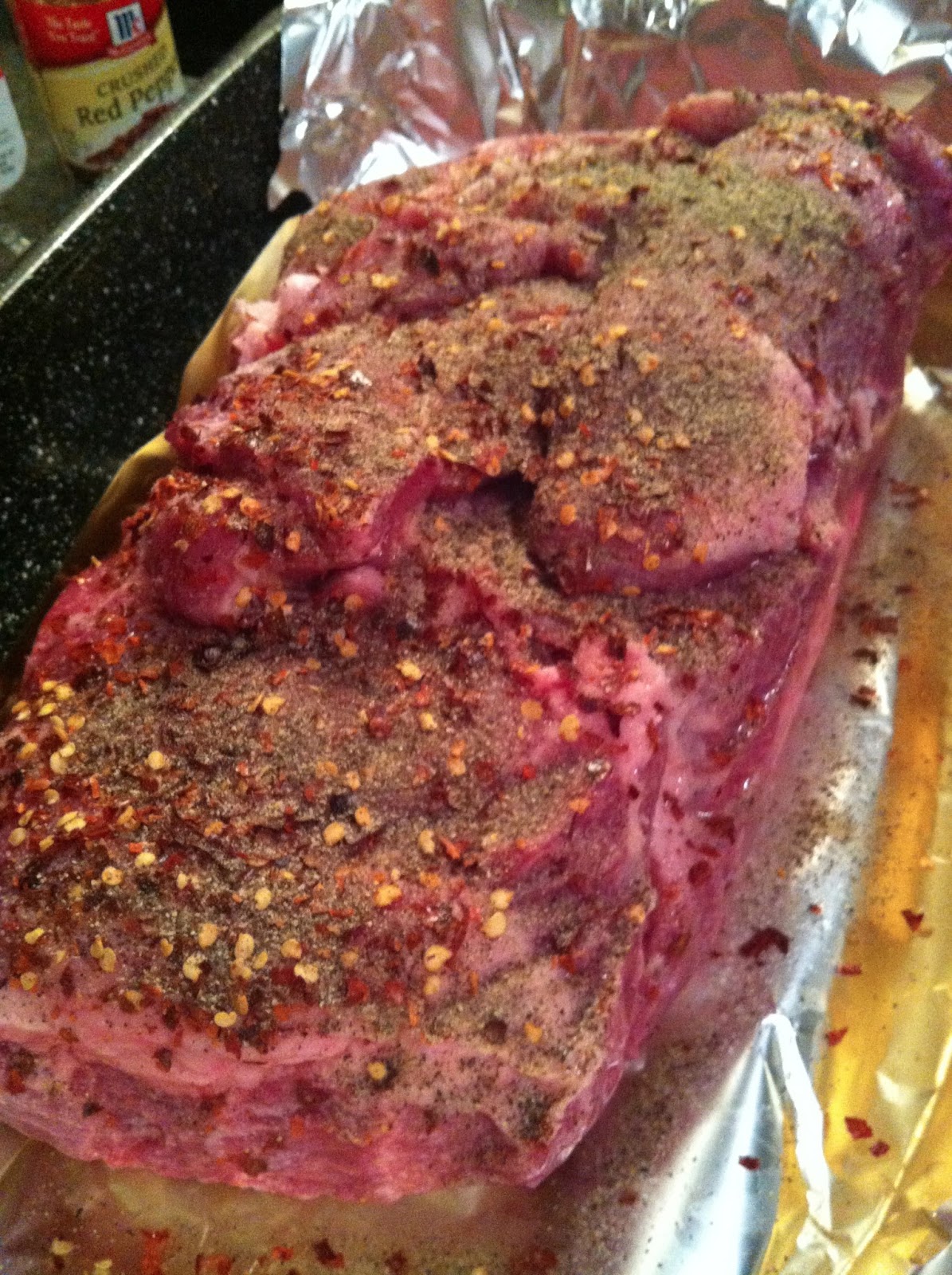 You're gonna cook that baby at 250 degrees for a longgg time. About 8 hours, maybe more if it's bigger. Basically, cook it until it's falling apart. Don't totally leave it alone the whole time though: you want to check periodically that there's enough vinegar in your pan. I poured in another cup or so of apple cider vinegar after about 4-5 hours and again after about 6 hours.

If you do decide to cook the butt whole, as I did, you want to cut it into pieces at some point so it can all cook through. I took it out after about 5 hours and did this, spreading the meat out and returning it to the oven for several more hours. Pork is much easier to cut after it's been cooking for a few hours than it is when it's raw! It definitely wasn't done at that point: 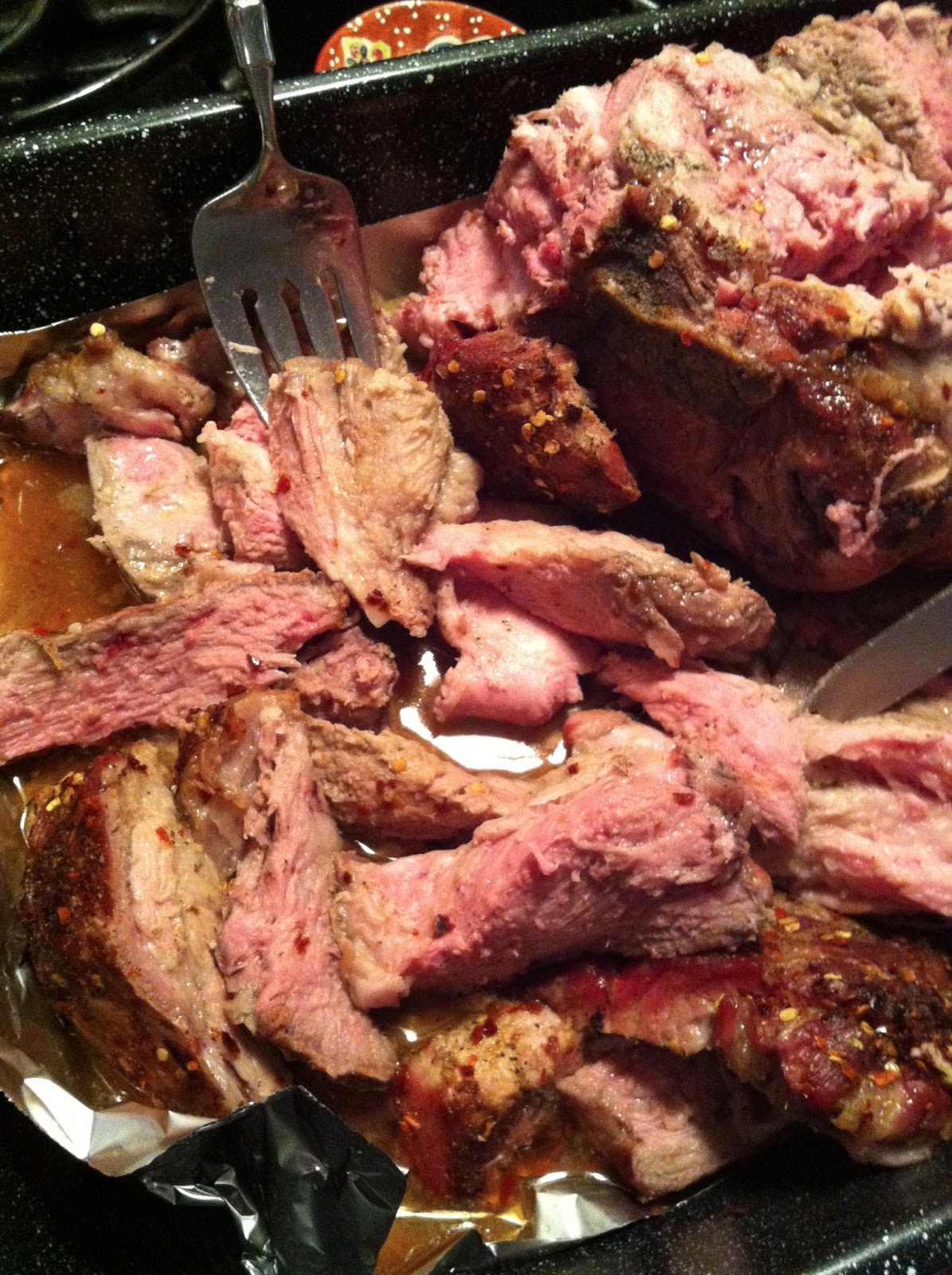 Again, cook it for a long, long time. All day. Until it's fall-apart tender.

When your pork is pretty close to done, make the barbecue sauce. This stuff ROCKS. So, so much better than the bottled stuff. Saute about 1/4 cup finely chopped onion and 2 cloves of garlic in half a stick of butter (that can't be bad, right?). 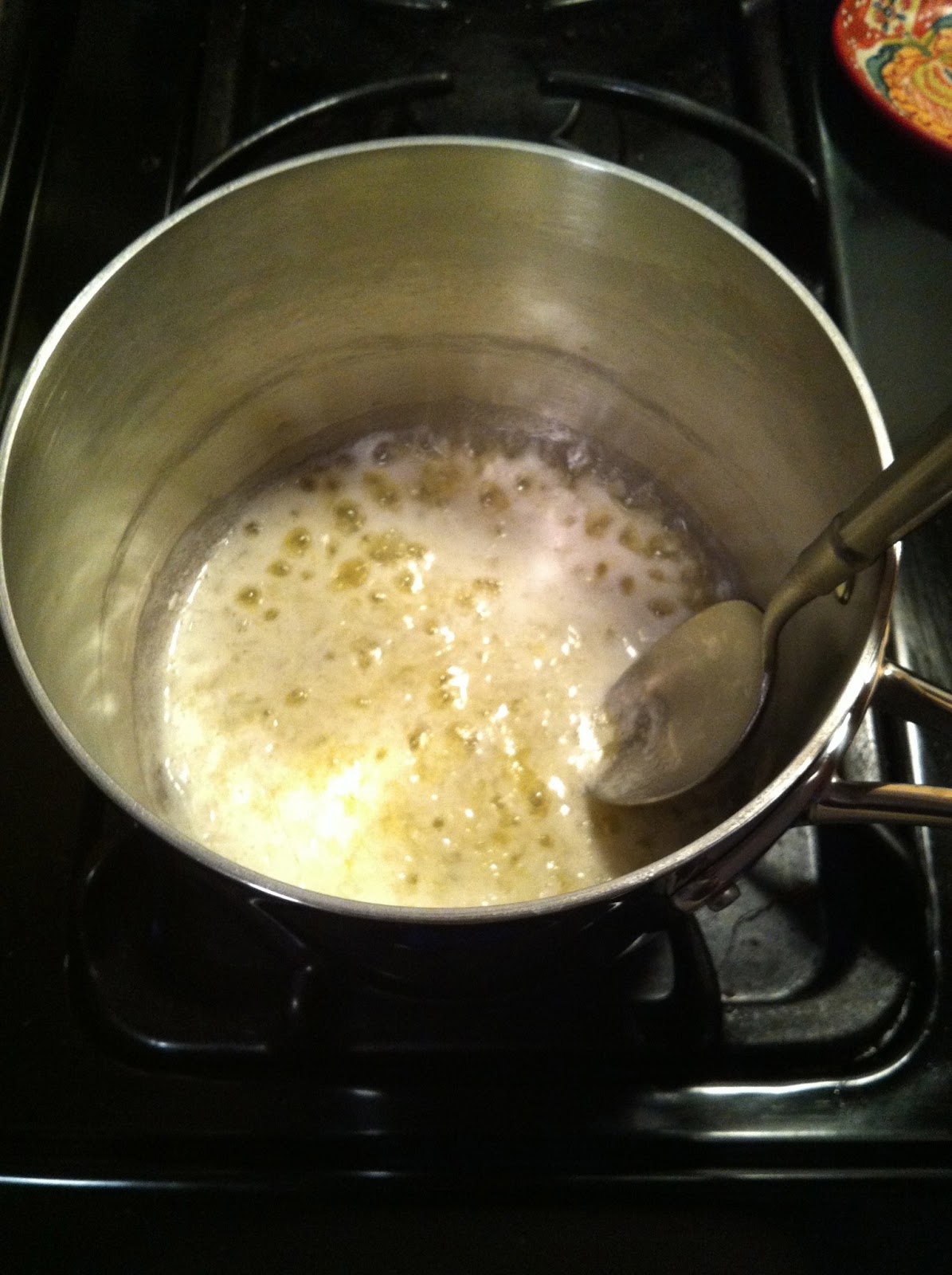 Add in the rest of the ingredients: ketchup, brown sugar, mustard, hot sauce, apple cider vinegar, worcestershire, salt, onion powder, red pepper flakes, cumin, and oregano. That's a winning combo right there. Bring it to a boil then reduce the heat and simmer for about 30 minutes, or until your barbecue is done. This sauce is so unique; way more dynamic than the plain old smooth sauce you're used to: 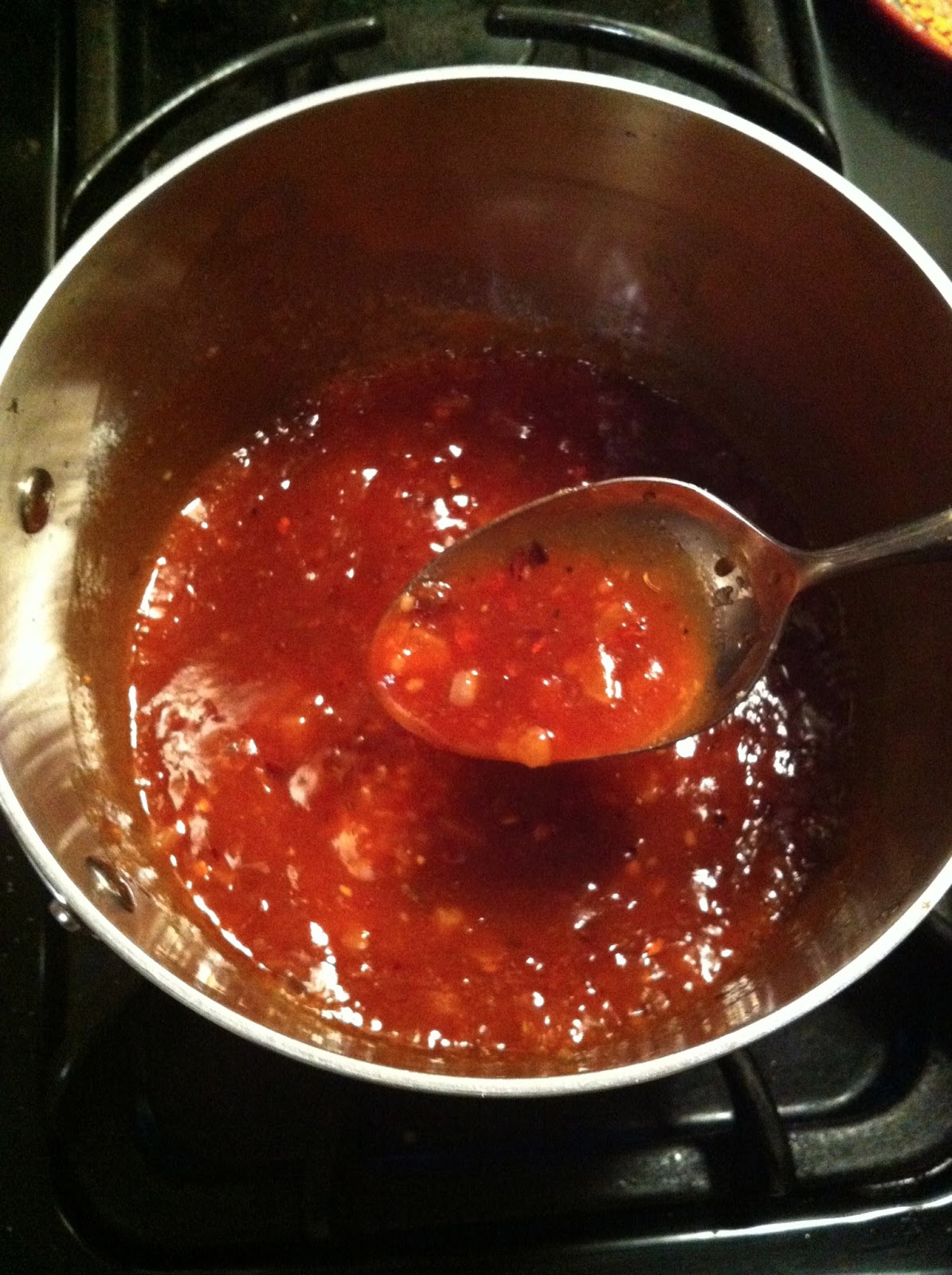 When the meat is done, shred it with two big forks. Pretty sure Ryan would be happy to just sit with this bowl on the couch and eat straight out of it. 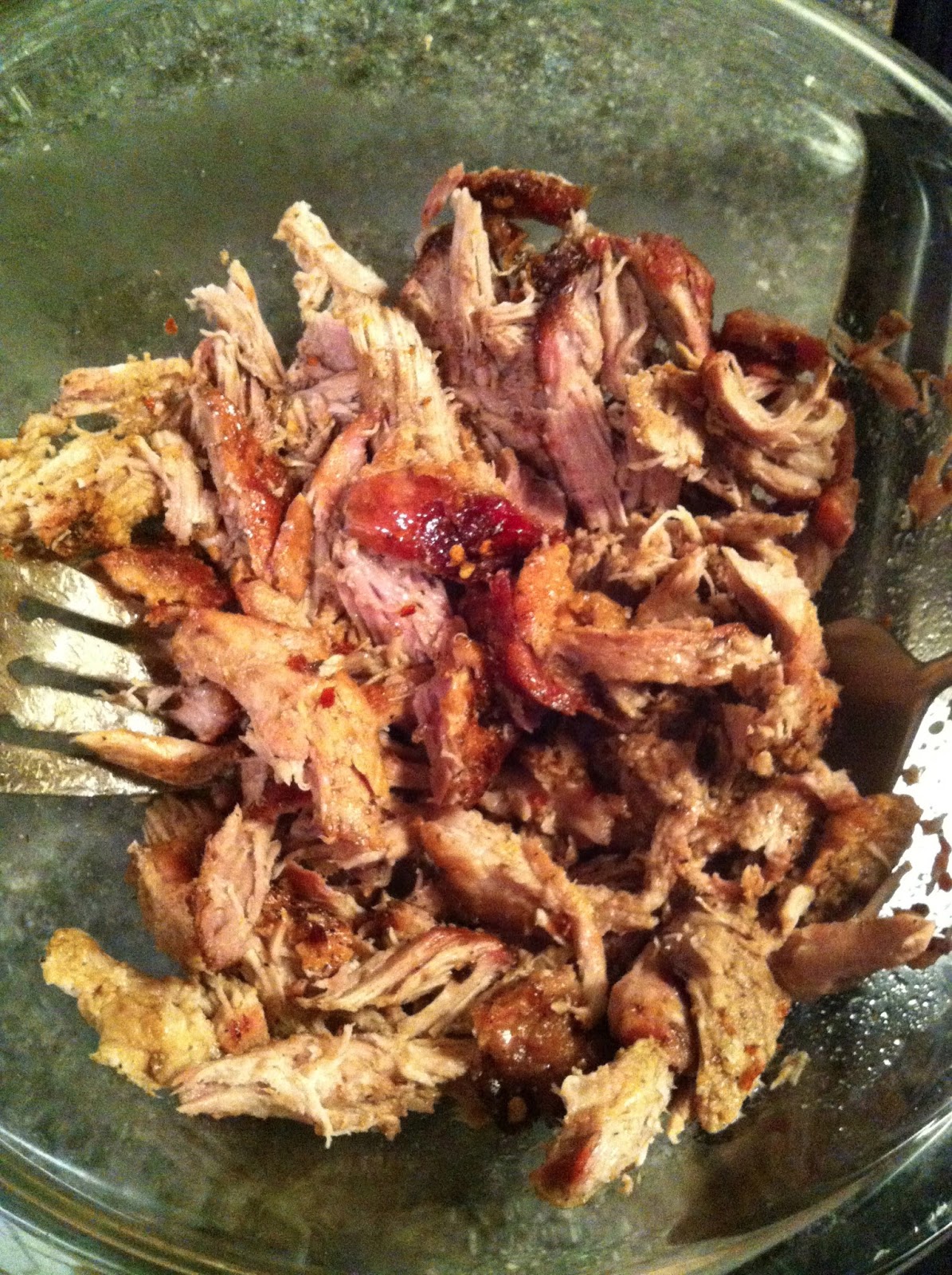 Okay, maybe I would too. Soo good. 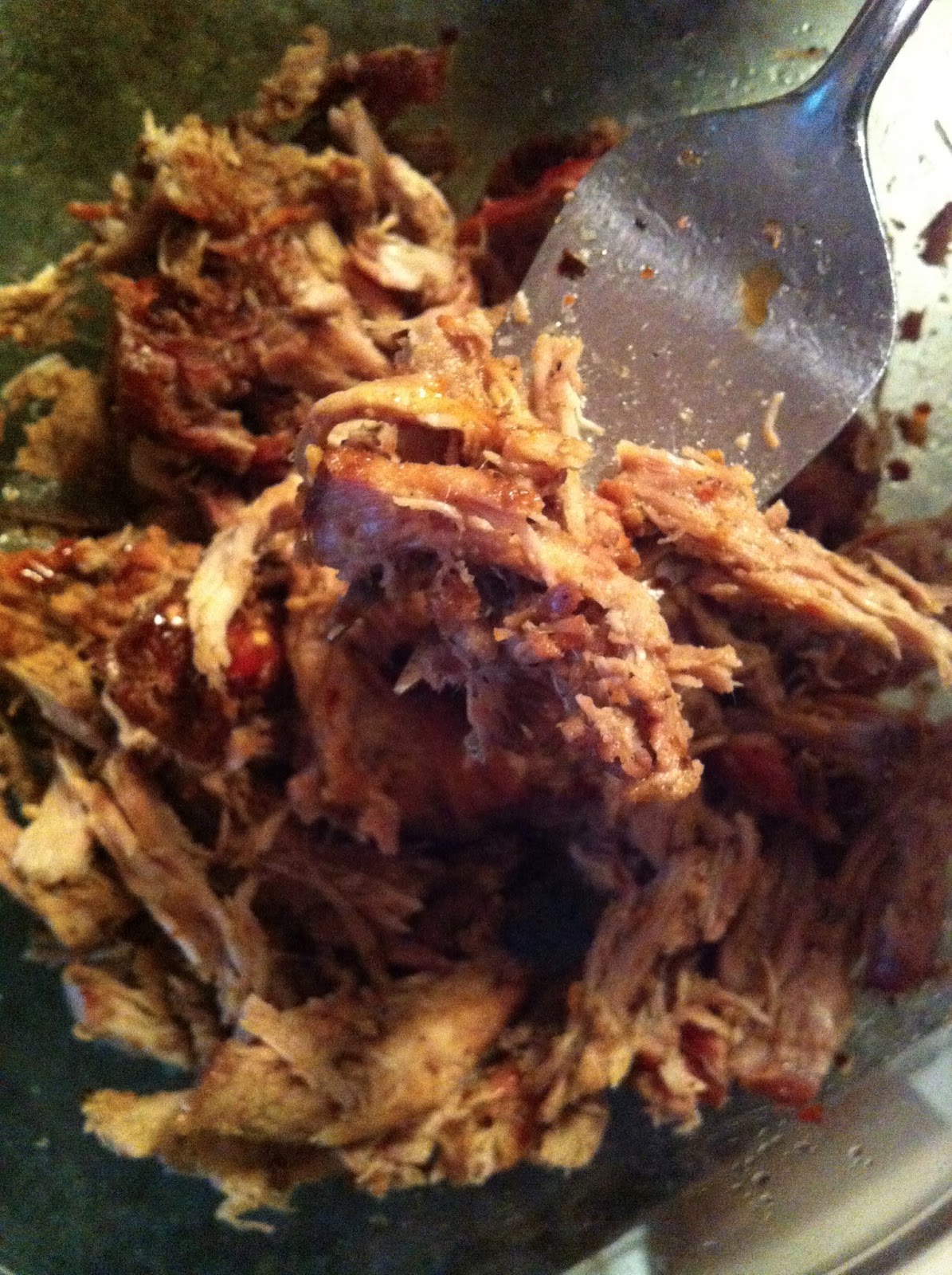 Serve it with buns, cole slaw, and that perfect barbecue sauce. 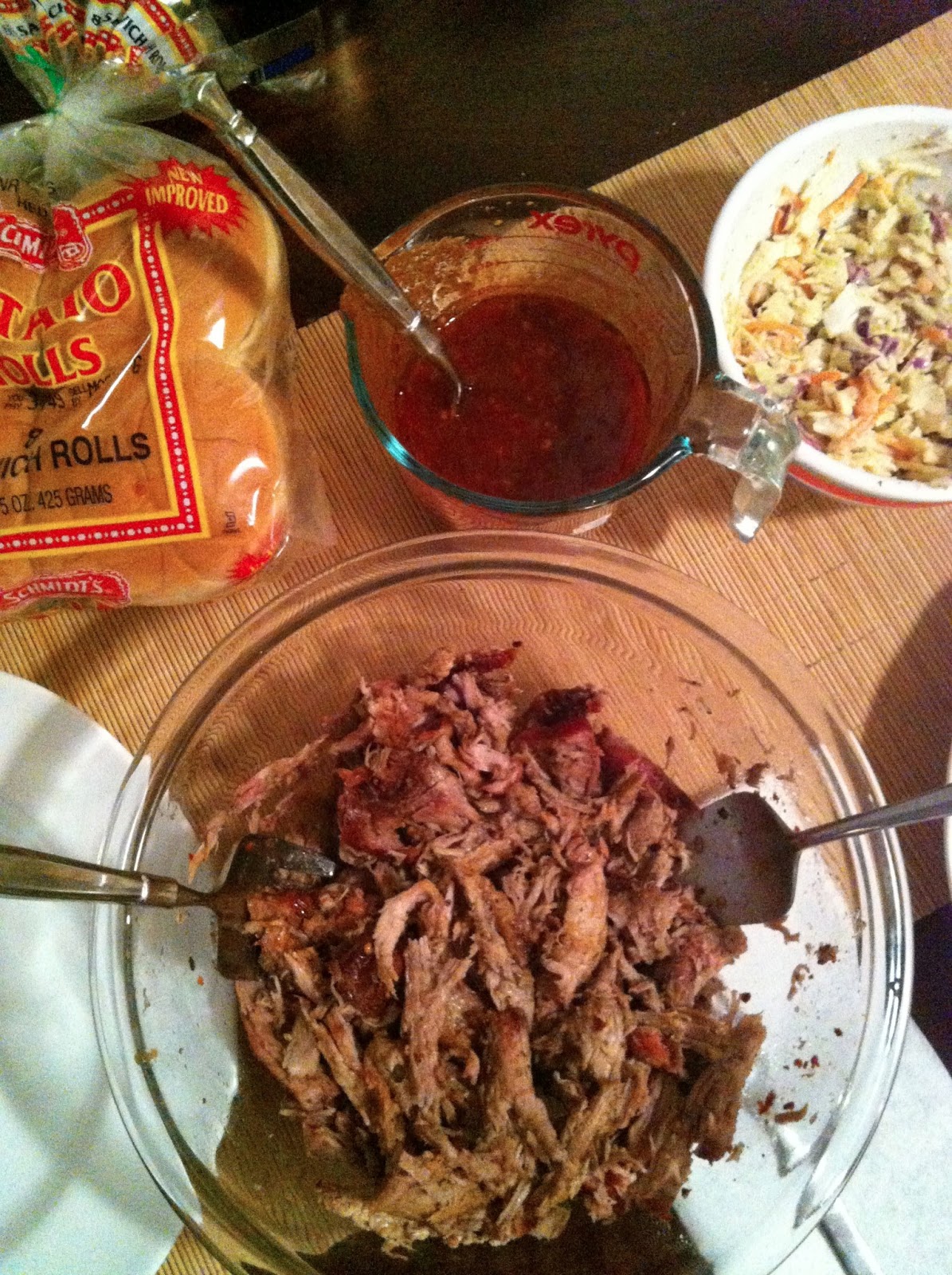 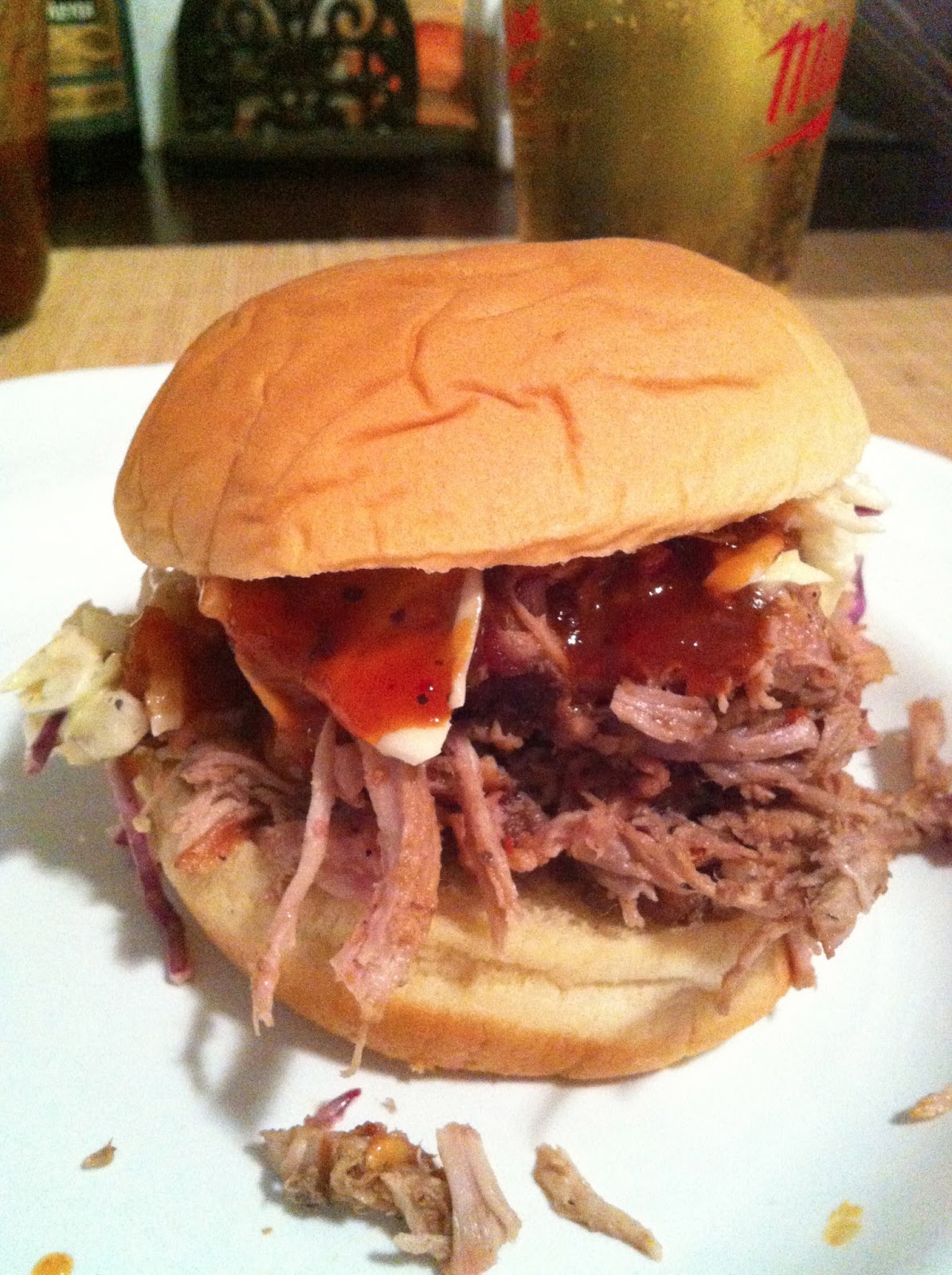